I feel like I’ve been hit by a bus. That’s because yesterday, I set off to do the Tenmile Traverse. The traverse starts in Frisco where you head up Peak 1, then continue along all the numbered peaks in the range until you get to Peak 10 in Breckenridge and descend back to town. I was successful in my attempt, with 17.5 miles and over 8,000′ of climbing completed in 10:15, but it was such an amazing experience that photographs and numbers can’t adequately describe it. I hope that I’m able to come close.

This is a day that’s been in the works for some time. I thought about it last year, then planned to do it on my birthday last month. It was put off until now due to conflicting scheduling, and I’m glad it did, because yesterday couldn’t have been more perfect.

It started like any other long day in the mountains. I woke up to the sound of two alarms going off almost simultaneously at the ridiculous time of 2:15am. Scout didn’t realize it was that early, and so was excited to get up and run outside as if it were any other morning. I moved a little more slowly, getting dressed, making two big breakfasts (one to eat at home, one to eat at the trailhead) and tea for the drive. It was right around 3am when I hit the road, and 4:30 when I pulled into the parking lot.

As I was eating breakfast #2 I talked to a guy in a group of 5 who was also getting ready to head out. Turns out they were also there for the traverse. I had hoped for solitude for the day, but figured a little occasional company wouldn’t be so bad. We all started for Peak 1 about 10 before 5, meaning there would be plenty of time to get above treeline for sunrise.

I got ahead of the group in the trees and opened up some distance, and was really able to enjoy the serenity of the pre-dawn morning.

It’s unfortunate that camera sensors have such a limited dynamic range compared to the human eye. These pictures just can’t compare to actually being there.

Better images can be had with better equipment, but I was traveling light this day, only a 12 pound pack including food and water. I wanted to enjoy the experience, rather than suffer by hauling several extra pounds up and down the mountains of the Tenmile Range.

By this point I truly was enjoying the whole experience, but that’s nothing out of the ordinary. Being alone above treeline before sunrise is always great. Soon enough, the first of 10 objectives came into view.

The sun hit on the approach to Peak 1, which made for some great views.

Doing something like this really makes you realize how close together so many of the ranges in the state are. Here are the Gore getting some alpenglow. 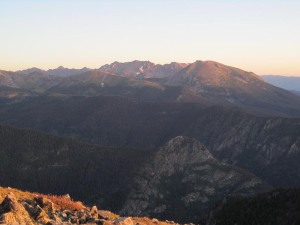 And the group that was also attempting the traverse this day. They were fairly loud, and I was amazed how well sound travels up in the mountains when the air is still.

And finally, Peak 1 bathed in alpenglow. This was a substantial hike, and isn’t a bad target in and of itself, at about 3,500′ of elevation gain.

A couple hours in, the summit was reached.

Peak 1 was a great warmup for what was to come. Peak 10 is visible here, far off in the distance on the left side of the picture. The coming ridgeline on the way to peaks 2, 3, an
d 4 is the most difficult portion of the traverse. It’s said that it can be kept to class 3, but my route had some solid class 4 (though I was able to avoid anything class 5).

The ridge from 1 to 2 was largely uneventful (though still a fun scramble), and there are no photos here of it. Visible here is “the dragon,” along the ridge from 2 to 3. It is the most technically demanding section of the day. 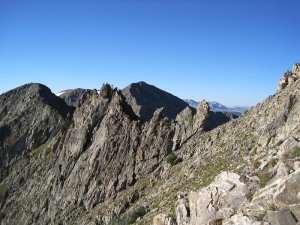 Here’s a look back. I started off on the west side and looked a few times for exits onto the top of the ridge. It was an unbelievably fun (though stressful) section, and I’m glad the group was there to help with routefinding through it. No good pictures from the dragon as I was focusing on getting through it, plus the lack of color variation made most of the photos worthless. 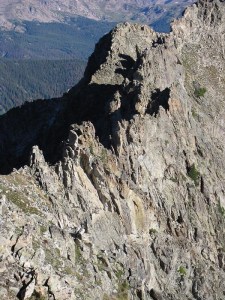 This is taken from the summit of Peak 3, showing the immediate change in terrain after reaching Peak 4. This ridge was less difficult than the preceeding two, but there were still a lot more “you fall you die” moments than I was expecting. The ridge up to 4 was generally a couple feet wide, but with vertical drop offs on either side. It was fun, but became very mentally draining by the end.

And at long last, Peak 4 and its accompanying gentle, rolling terrain was reached. This was a huge relief, making the coming easy tundra walk far more rewarding than it otherwise would have been.

I set off for Peak 5, leaving the other group behind for the rest of the day. I would not be within shouting range of anyone else that day until I was heading back down into Breckenridge in the afternoon. I finally had the solitude I wanted.

I didn’t even stop moving while going over Peak 5, as it was little more than a small bump along the ridge without anything of real interest. The following photo was taken between peaks 5 and 6. It was the most blissful, serene moment in the mountains I’ve ever experienced. There was a small dip, filled with short grass blowing in the constant, moderate breeze in the ridge. The lighting was perfect, and it was silent except for the wind. I had no choice but to sit down and simply experience it for a few minutes. The beauty of the morning, the camaraderie seen through the difficult sections, and the danger of the climb all came together and hit me at once. I felt like I could have stayed there forever.

Sadly, I had to get up and keep moving. Things started to get more physically demanding again after Peak 6. Peak 7 was not terribly steep, and hitting the ski area boundary gave a mental boost as I knew I was getting closer to the end.

This shows Peak 8, with the melted-out run known as Whale’s Tail. It’s a blast in good conditions. The climb up to 8 wasn’t very difficult, as I’d done it dozens of times in the past carrying skis over my shoulder.

This is Peak 9, with the summit being the small bump on the left. I was noticeably slower here. The miles and several thousand feet of climbing were adding up and taking their toll on me. The various emotions of the day were piling up as well, and I’m glad it was an easy walk up so that I didn’t have to be 100% focused on the task at hand.

Rock that looks a little something like this. I got my only real injury here, when a loose rock smashed a finger. My fingertip was immediately red, and there’s a chance I’ll be losing another nail. Fortunately nothing’s broken. It was a hard 700′ of climbing, and despite my growing exhaustion and slowing pace, failure never even crossed my mind. I had come this far, and I would make it to the top no matter how tired I was.

An hour after leaving Peak 9, I made it. I was overjoyed, having done something of this difficulty in a single attempt. Yet almost immediately, I realized that reaching the final summit was not all that spectacular – that the journey is what really mattered, and is one of the major things I would take back from this day. I only stayed on top long enough to eat something and snap a couple pictures before heading down to town.

Here’s a look back on the route. Kind of hard to make out, as it’s pretty far off. 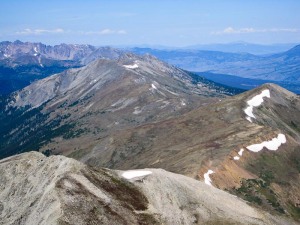 Down lower on Peak 10, I found these guys with a pretty cool park set up. There was also a guy skiing on a different patch of snow. Way to get after it in August, guys. 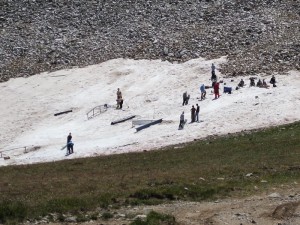 The trudge down the ski slopes felt never-ending. I wished I could have skied down, especially the farther down I got, as towards the bottom the vegetation got much thicker. There were even marshes with my most hated mountain plants, willows. 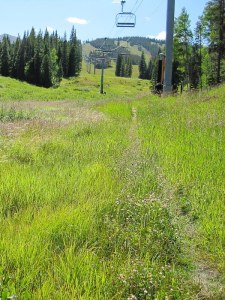 Truly an amazing day, probably the most spectacular one I’ve ever spent in the mountains. Words can’t adequately describe the experiences, emotions, and realizations of the day, which is all the more better as it’s absolutely not what I was expecting. I just thought it would be a long, challenging day in the Tenmiles, and I ended up having a near-life experience.