Earlier this year, the Rodeo guys posted up a trip they were planning through the Flat Tops Wilderness. It looked ridiculous – three days to cover 265 miles and nearly 20,000′ of climbing over mixed terrain in places bicycles are rarely seen. I didn’t know what bike would be appropriate, or if I’d even have an appropriate bike for the trip. I did know, however, that it would be perfect training for the Leadville 100 bike race. So I signed up, knowing I had a lot of work to put in before mid-July rolled around.

Working nights most of the summer on top of raising a family got in the way of a lot of training time, but preparing for this trip and the Leadman series were a big enough priority that I fit in what I could; even so, I was nervous in the days leading in to the weekend. The day the trip finally rolled around, I woke up to my alarm at 3, had a small breakfast and coffee, and hit the road. I got to Steamboat a bit early, but before I knew it we were loading up the support van and getting ready to roll out.

Day 1 was 83 miles and over 7,000′ of climbing on primarily dirt/gravel roads. After a 20 mile flattish-rolling approach it turns uphill for a long gradual climb, topping out shortly after mile 50 for a lunch stop.

A couple miles after lunch, it started drizzling. And then raining a bit harder. And then raining even harder still. And then we turned back uphill, on a big, steep, miserable slog of a climb in the rain. It constantly felt like we were at the top of the climb, only to come around a bend to see the road angle up a bit steeper and continue around yet more bends. After another wet, ripping descent, we hit the final pitch of the day, several miles on a dirt road that looked flat but certainly wasn’t. 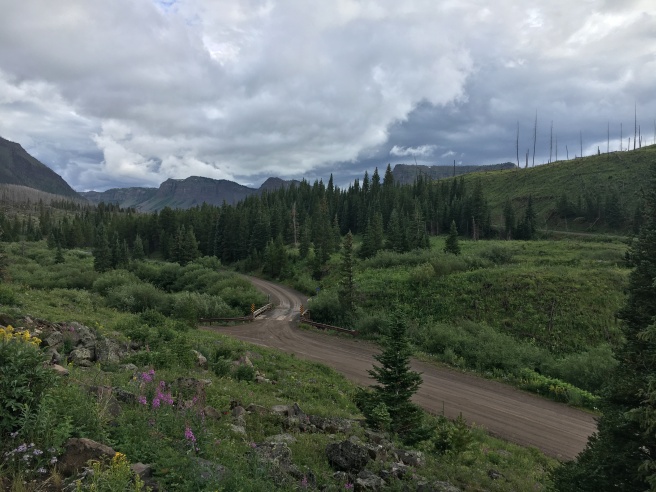 Eventually we all made it to the lodge at Trappers Lake where the staff hosed down our bikes and their riders. Hot showers were very welcome after three hours of riding in the cold rain, and were followed by dinner and getting to bed early.

The next morning started with a ripping descent, with the group covering 26 miles in the first hour. 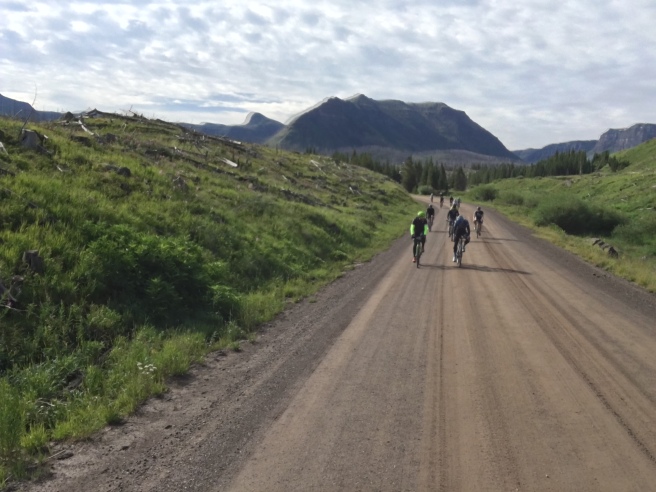 We started a long climb immediately after the descent, gaining 3,000′ on a mellow dirt road through the woods, getting to our lunch stop at mile 40. With more than half the day’s mileage climbing done in a mere three hours, we all felt good and expected to be to camp quickly.

The road wound onward, and rewarded us with amazing views. 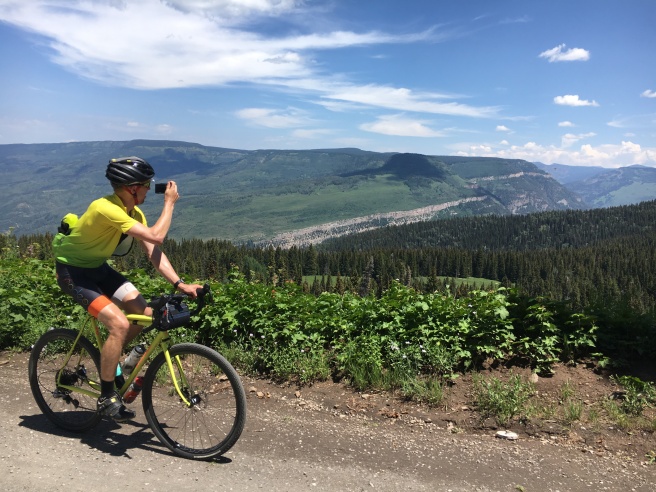 Suddenly, everything changed. The route directed us up a road that barely looked like a road: steep, narrow, and covered in baseball-sized rocks. So up we went. Things got rougher, and boggier, and just generally got interesting. 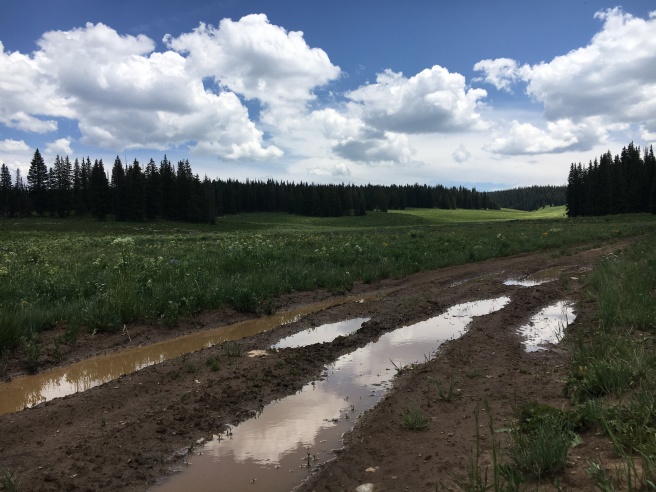 But “interesting” doesn’t always mean “bad.” The going was slow, and there were a couple minor crashes and mechanicals, but there were also smiles all around. 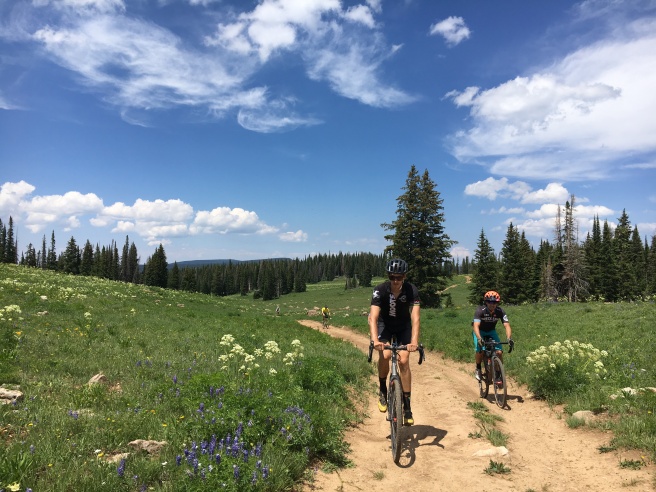 A quick descent later and we were climbing yet again, to nearly 11,400′. The wildflowers were like nothing I’d ever seen and took away the breath of anyone who had any left from the climbing. 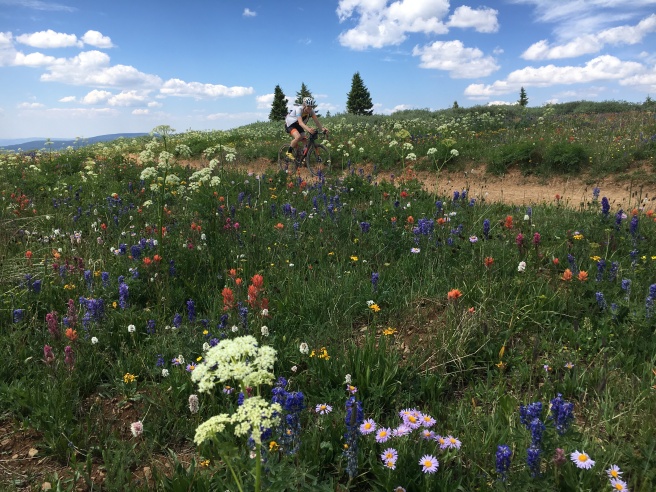 Before we knew it we were at the high point of the day, at the edge of a sheer cliff. The views were unbelievable, and we all stopped to soak it in for a while. 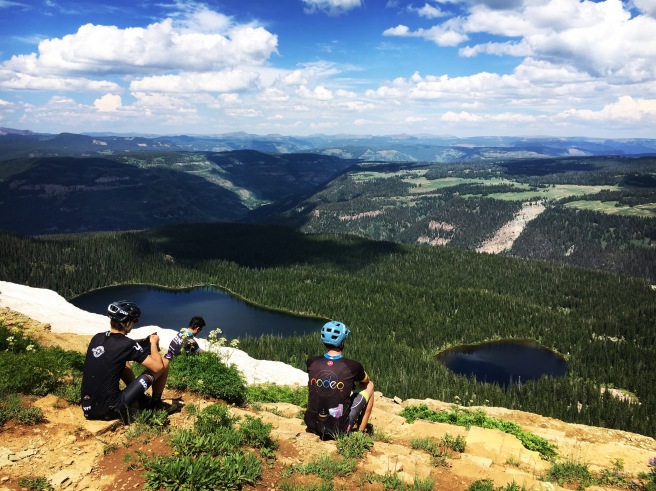 Things got a bit rough once we were moving, with descents and climbs that made me very glad to be on a mountain bike. Everyone made it, though not without a few crashes. Eventually we hit a dirt road, with only a few miles remaining to camp.

We got the last available campsite at Deep Lake for the night, The Cyclist’s Menu was already cooking when I rolled in, and cold beer from Elysian Brewing filled the coolers. I hadn’t eaten so well in a long time, and never expected anything as amazing as what they put together. Should this trip happen again, I hope they’ll be there!

It was a fairly quiet night around camp, though unfortunately without much of a campfire. Without any firewood, and everything in the area soaked from rain, it was a fairly low-key evening – which was probably for the best, since day 3 was going to be 110 miles on tired legs. I opted to only bring a bivy bag for this night, and was rewarded with amazing views of the night sky that only being at 10,500′ in the middle of nowhere could afford. It was so clear that when I opened my eyes in the middle of the night, I could instantly make out details in the core of the Milky Way. Truly amazing.

The final day started out with another amazing meal from The Cyclist’s Menu, a few miles of rolling, and long, fast descent to the Colorado River. 20 false-flat miles in a paceline later and we were really climbing again, this time with no shade in the mid-day sun. A couple hours later we hit the high-point of the day, where I was lulled in to a false sense of comfort.

The elevation profile for the day started with such a drastic drop (4,000′ in about 15 miles) that it hid the endlessly-rolling terrain of the final 40 miles. One of the Moots guys lives along the route we took, so a stop for an ice cold Coors was in order. I almost blew by his house, but hit the brakes when I heard yelling. 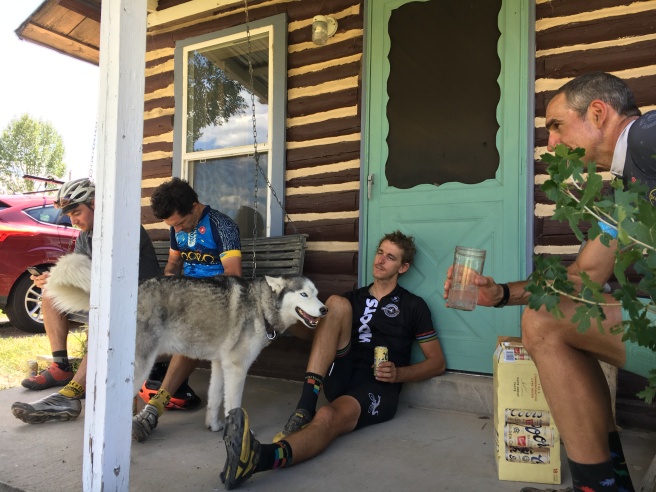 Nearly an hour later we were back on the road with nearly 30 miles to go. I couldn’t hang on to the group, and was on my own again almost immediately. The scenery was beautiful, but I was hot, dehydrated, and ready to call it a weekend. A while later I joined back up with another one of the riders, and before I knew it we were rolling in to Steamboat.

It was truly an amazing weekend, and I can’t wait for next time. Huge thanks to Stephen for organizing, Gabriel for driving the van, Remi for bringing the van and the beer, the guys from Moots for helping with the route and coming along for the fun, Zander and Heidi for the great food, and everyone on the trip for making it such a great time.

As I write this, there are fewer than nine days remaining until the 100 MTB, less than sixteen to the start of the 100 Run. I’m currently sitting at 7/66 in the Leadman series, which I’m pretty happy with. It’s getting tough to focus on much other than the races, and I’m looking forward to wrapping up the season with a couple great days in the mountains. Training has been going well-enough, though this close there’s not a lot of gains to be made. It won’t be long now.