Last night, I woke up at 11pm to go climb this mountain. It’s in Rocky Mountain National Park, just outside of Estes Park, CO. It’s the highest mountain in the park, at 14,259′. It’s 7.5 miles each way. 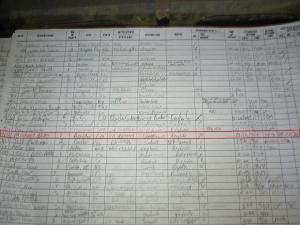 I left the trailhead at 1:25am, at an altitude of 9,405′. As you can see, there were a few people who got out before I did. It starts with a couple miles of hiking through a forest. Very nice and a great way to start the hike, as the trees keep the wind off you, and the path is rocky, although not nearly as bad as the rest of the way.

Once you get above the timberline, the wind starts to pick up. I thought it was pretty bad. It gets rockier, and you hike for a few more miles. A little later, you get to what’s called the Boulder Field. Pretty steep, the trail disappears, and you have to scramble up a bunch of car-sized boulders. I was there somewhere around 4am, took the picture on the way down. This is maybe 1/2 way down the field. I had passed all 6 people ahead of me by the time I started in here. 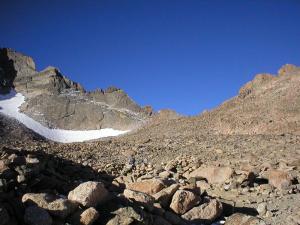 At the top of the Boulder Field is “the keyhole.” I was here about 4:30. The wind up there is absolutely insane – there is no refuge from it except the little hut on the left side of it. I stopped for too long here and was getting really, really cold. The wind almost forced me back, but I decided to just go for it.

After this, it turns from a tough hike to a moderate climb. The mountain drops off a couple thousand feet on the other side of the keyhole, you go down, and follow around the mountain for maybe a mile of climbing at 35-45 degrees in ice and snow. It’s considered the worst part of the whole way. Get past that and you’ve got a few hundred yards of “the narrows,” a walkway that ranges from 10-20″ wide above a very, very, very big drop. Screw up too bad here and you’re dead. After that, the “homestretch,” a few hundred feet in a crack in the mountain, pretty steep and you’re at 14,000 feet at this point. No pictures for these parts, because I was more concerned about staying alive. Also, it was very dark most of the way, so pictures wouldn’t have been very useful anyway.

I got to the summit at 6:25am, only a minute or two ahead of the sunrise. The wind was absolutely brutal, so I only stayed long enough to sign the summit register and snap a couple pics with my phone (it was easier to get to than my camera), then I got the hell off and came back down the mountain. I was the first one up today, which was pretty cool. Passed a few people through the long, steep climb on the way down. Here’s a shitty pic of the sunrise from 14,259′.

When I got back down to the keyhole, I rested and talked to people about the conditions. There were probably 30 people muddling around there, trying to decide if they wanted to go on or just turn around. Most turned around.

Everything is sore, it hurts to move, and I’ve got way too many pages to write for school on monday.