It’s been a while since I’ve summitted a 14er – or anything that didn’t have a chairlift most of the way up. With this being the last weekend of winter for the year, I needed to get out and do at least one calendar-winter 14er. I woke up at 3am, we met in Morrison at 4:30, and blasted up the hill.

It was still dark out when we started, but the sun was right behind us. About 15 minutes in, we were treated to this: 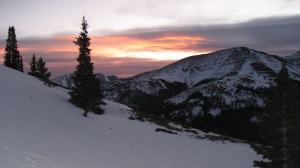 The snow was pretty frozen early on, which, while not as important to me since I was skinning up, was very important to my friend who was still postholing every once in a while. After we got past treeline, things got pretty solid. Now for some pictures:

One ptarmigan of many who were wandering around on the snow. This one let me get within about 6 feet before it scuttled away:

Me and my bitchin’ goggles:

Me skinning up the mountain:

Andrew hiking up (no AT bindings):

Once we hit about 13,500′, the going got a little slow. I was out in front of Andrew and some guy who was hiking up and had left a little before we did. They looked like Tim and Gerard on Everest – Beyond the Limit at the end. I wasn’t doing a ton better, and didn’t think to get any pictures of it. I got to the top about 20 seconds after two people who’d climbed Cristo. The wind was insane. Now for the summit photos:

Me having fun leaning into the wind: 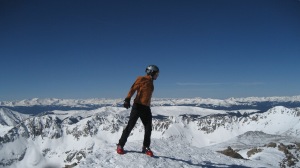 After screwing around on the summit for half an hour or so, we took off. The ski down was great up top, mediocre in the middle, and horrendous at the bottom. Both of us were falling 3′ into the snow – with our skis on. Nice, eh? 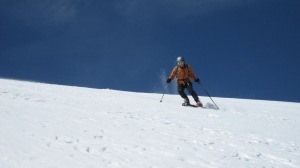 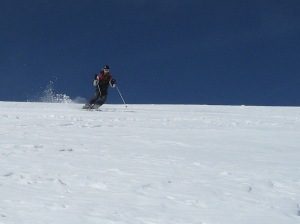 Around treeline we stopped under some trees and made some black & tans. Hit the spot for sure: