It’s been a while since I’ve really gotten out there. Pretty high avy danger this year, going out of town, and miscellaneous projects all put a damper on it. This is nothing like some of the other peaks in CO getting hit (Capital, Pyramid), but I would die if I tried those. Wanted something with some challenge but semi-close and not something that would require a 12+ hour day, so I woke up at 3am and got ready to go.

When I don’t do this for a while, I start to forget why I do it. I was asking myself that last night when I went to bed, when I got up at three in the morning, and on the entire drive there. It took me a while to figure it out, even with views like this all around.

When the road is melted out, you can go straight from where you park to the 2,500′ couloir and start climbing. When it’s snowed in, you get to go an extra two miles on foot. That’s when I saw the first good view of what I’d be doing today.

It’s the farthest left strip of snow going top to bottom. The summit is in back.

45 minutes after I started or so, I was at the end of the road. Just in time for sunrise.

It was pretty cold this morning. 6 degrees and strong winds. Fortunately, the wind would die down through the morning.

I jumped behind some trees for a windbreak, and switched over from skis to crampons. There was a pretty decent view of the route from here.

A couple minutes in and you could see it all.

There’s a party of five non-ski mountaineers visible in that picture. Right behind me were two more skiers. After a while, we all ended up bunched together. For anyone interested, there’s a hell of a bootpack in place now.

When I go up in to the mountains, I tend to get a song stuck in my head for most of the hike. Usually, it’s some crap I heard on the radio on the way in. Today, it was Jingle Bells, probably because of the amazing amount of snow still around. I was climbing the couloir, Jingle Bells just constantly going off in my head. Almost ridiculous.

A couple hours of that and you get to the top. I made it there just before 10:30. 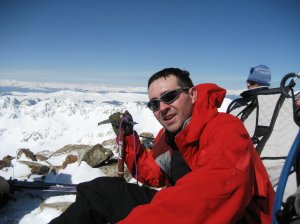 I hung out for a while to let the sun soften the snow. As cold as it was last night, and with the wind still going lightly, it took a while. I finally had to just up and go, because I was getting pretty cold. It was a tough ski out, with extremely variable snow, and me with skis that aren’t very good for it. Going down the road was worse, frozen solid and with big soft skis that were collecting ungodly amounts of sticky, wet snow. Finally made it back right at noon, for a 6-hour car-to-car time. Not too bad.