Today was the day of the Elephant Rock Cycling Festival, down in Castle Rock, CO. There are several course options, ranging from very short up to 50, 65, and 100 miles. My roommate Nate brought up the event, and signed up for the 65 mile (aka metric century) option on Wednesday. I had intended to do the same, but a couple beers and a little machismo let to me signing up for the full blown century ride, complete with 3,500′ of cumulative elevation gain. Oops.

I was out of bed at 4:30 this morning, threw down some breakfast, and we were on the road about 5am. We followed the convoy of Subarus with bikes in/on/behind them all the way down, got our registration packets, and started pedaling at 6:10am. Not long in, we came to the first substantial hill, and the pain kicked in for the first time. I was thinking I’d probably be better off just not taking the turnoff for the Century, and doing “just” 65.

I blew past the first aid station at mile 8 (seriously?), and started feeling pretty good. I had figured it out, I just needed to get the blood pumping and I’d be good to go. Another 14 miles and I was rethinking things. The first text message in a series of many to Nate – 7:46 am, aid station #2 (22.4mi):

As I was leaving the station, I sent the next text message:

Keep in mind the longest ride I’d done before today was on the order of 27.5 miles in one shot. After some fruit, refilling my water bottles with energy drink, etc, I started feeling better. Two miles later, I made the fateful decision to turn left, sending myself on a detour on the order of 35 miles long. The next text message came an hour and a half later, at aid station #3 (36.9mi):

I was starting to tire, but every aid station gave me a chance to jam bagels, fruit, gu, and energy drink in my mouth, and to rest for a few minutes. What followed was an absolutely gorgeous ride through the plains out to the east of Black Forest. The clouds were creating spectacular lighting – I wished I had my camera (though I’m glad I didn’t, I didn’t need any more weight or distraction). This is an area I may have to return to for a nice ride someday. There was an unfortunate headwind/crosswind most of the way, which drained me even faster than I otherwise would have been. The text message from aid station #4 (48.3mi), 10:10am:

Such powerful emotion conveyed in four simple letters. The climb continued from this point, although it was largely through the forest so the wind at least was broken a bit. An hour later at the next aid station (61.2mi), Nate’s phone received this gem:

The hills had been getting to me, and I was wondering if I could finish at all at this point. They constantly rolled on and off, too short to gear down and pick up any real speed, but long enough to hurt on the way up. Around mile 67, I went blind from sweat, possibly mixed with sunscreen, running down into my eyes. They seared any time I tried to open them, and wiping was less than worthless. I rode blind for a couple minutes, then pulled off the side and sprayed my eyes out with water. At the next aid station (68.2mi) I saw that Nate had finished the 65 (and felt spectacular – his words, not mine) and sent me a note saying the last hill wasn’t as bad as the map showed. I certainly hoped so; I also hoped I was just about to the top of it. I (incorrectly) remembered almost constant downhill from around that point.

I got more and more drained as the constantly rolling hills continued, and eventually reached what I thought was the final hill. I tore down at 30-35mph, thrilled that it was finally over. Then I reached the true final hill. It was a long, constant, painful gain at roughly miles 89-92. I had to stop several times, dismount, and lean on my bike just to breathe and let my legs get a little bit of energy back. At some point Nate had asked if I was alive via text. This is the final text, sent from near the top of the hill (but not quite there). It was 1:37pm, and my bike computer said 93.0 miles:

Thankfully, I finally reached the top of the final hill, put it in top gear, and rode the tailwind most of the way back. The final stretch has you going under the highway, and up one last, very small hill – then you turn off into a gentle downhill, and coast across the finish line. Pure agony: 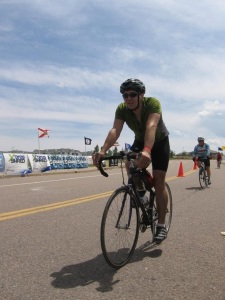 My computer said 101 miles, with a total ride time of 6h50m. I hit the brakes, clumsily unclipped and unmounted the bike, and painfully hobbled the bike back to the car. I’m still in pain, and expect to be at least tomorrow, probably through mid-week. I’m amazed that I stuck with it, as painful as it was, and I’m glad to have done it.