Katrina and I just got back from Seattle late, late Sunday night (technically Monday morning). It’s absolutely beautiful there, and I took nearly 500 photographs with my fancy new (to me) 30D. I’m starting to sort through the shots. Not much from Thursday. We flew in fairly early in the morning, got the rental car (Dodge Durango, perfect for sleeping in the back), and headed in to town. Traffic was terrible, even at 10:30am.

After a little driving around finding our way, we made it to the Space Needle. Surprisingly, it was cloudy and cold. Here’s a shot of the bay from the observation deck: 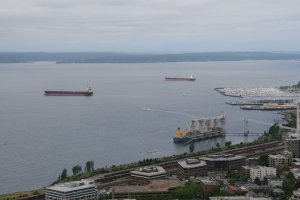 Not many of the other views came out well. From there we walked along the waterfront to get lunch at a crab place that served surprisingly little crab. After that was Pike Place Market, which was very cool and interesting. Katrina had 5lb of the most ridiculously huge crab legs overnighted to her dad, then we went to the Pike Street Brewery. We showed up right in time for happy hour, so I did the sampler in pint form. Our first round was purchased by some guys from Seattle’s network steam utility. I need to give one of them a call and talk a while, because I was so stunned by the area that I’m considering moving out there one day. Two hours and several postcards later we worked our way to the art museum, which was fairly small but interesting. After that we headed back to the Space Needle to change and get ready to head out for some night life. Here’s the only other decent shot of the night, just before heading out:

Beautiful. Finding the nightlife was challenging. We were directed to Pioneer Square, which was dead. A quick stop at a sushi place for a little food, a beer, and a birthday shot and we headed for the “hotel” spot for the night – as suggested by the guys at the brewery, I found a parking spot underneath the Alaskan Viaduct with free overnight parking. A few uncomfortable, restless hours later it was morning, and I was off to scare up some breakfast.

I’ll be continuing this over the next few days, since it was a four day trip with hundreds of pictures. The next days will be far more photo intensive, as I used my camera more, and it was even more beautiful than the city.