This trip has been my greatest adventure in the mountains yet. Beautiful scenery, climbing instruction from some of the best, and an amazing climb is going to make this hard to top.

Day -1: Saturday August 23, 2008
This was a long day. After picking up my dad and loading up piles of stuff, we were off for Wyoming. Hours went by with nothing but the plains to look at. As we got closer to Jackson, the geology got a little more interesting.

Not much later, I had my first view of the Tetons. There’s no way to describe the excitement stirred up by seeing the silhouette of this amazing range for the first time.

After stopping by the climber’s ranch to get set up, we went in to town for dinner. I was disappointed with how bad of a tourist trap it was. We left pretty quick after we ate.

Day 0: Sunday August 24, 2008
Sunday was all about resting up and doing a little sight-seeing. The day started off with a short walk at Jenny Lake.

A scenic over Jenny Lake:

This guy was hanging out by the dock at Jenny Lake, completely indifferent to all the people around. It had been playing in a stream shortly before we arrived.

Then it was off to a lodge with the most amazing view.

Here’s Mount Moran. The obvious line down the east face is known as The Skillet. I hope to be able to stop to ski this in April either on the way to, or back from Rainier. 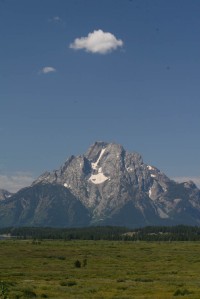 And a close-up of the Grand. Sadly, it was pretty hazy that day. 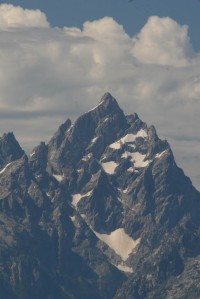 Then it was a long drive to a quick stop at Yellowstone. 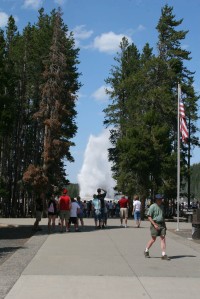 It was a long drive home, then dinner and early to bed. The fun was about to start.

This was mostly practice with ropework, so that we could get used to belaying, and all the appropriate commands. Here, you can see our 74 year-old guide/instructor walking down a woman who thought it’d be fun to take a rock climbing class, and then had an honest-to-god freak-out after about 15 vertical feet of class three walking.

The other four of us were glad to have her gone; she had been wasting the time of those of us who were there to climb the Grand. We quickly moved on to some rapelling a small rock in the 20′ range, with a 10′-15′ free-hang. After doing that a couple times, we did a couple (very short) single-pitch climbs in the low-5 range. Then it was back to the ranch for dinner, and early to bed for some sleep on the 1/2″ plywood bunks.

Day 2: Tuesday August 26, 2008
On to day two of climbing school. The guide teaching us today was Stephen Koch. He was a great guy, and I only found out the next day when talking to my guide for the climb that he’s a pretty well-known snowboard mountaineer, with many first descents.

The other three people in the class were the same as the day before. It was a party of three who had chartered a private climb with Stephen for Thursday/Friday. One of the three had climbed the Grand with him in 2000, and requested him for this outing.

This picture has Teewinot on the left, Mt. Owen on the right, and the Grand p
eeking out in the middle.

We did a climb called Open Book to start the day, which was rated at 5.6. We had a quick lunch and went on to the rappeling, this time 80’+ high with a 65’+ free-hang. Here’s John, mid-descent.

Here’s the climb. It goes up to the left of the V at the bottom, then moves up and left from there.

Here’s me, with the start of the climb in back.

We did a few more climbs, then started the walk out. I was scheduled to start the next day (Wednesday), and it sounded like I would’ve been a welcome member on their climb, starting Thursday. I had signed up to be dropped into a random group, but everyone else going up when I was had signed up for a private climb, meaning it would’ve been just me and a guide. I wanted to join them, but needed to finish and get back home. Back to the ranch for dinner, beers, and prep for the next day.

Today was the hike up to the saddle between the Grand and the Middle Teton. It would be a tiring hike, 5,000′ of vertical over 7 miles. It was a late morning, not getting started until almost 10:30. It was a nice cool day down low, light clouds and a gentle breeze. As we moved on the winds picked up. We encountered party after party who had to abandon their bid for the summit due to excessive winds. At one point, we passed two climbing rangers. They had made the summit via Owen-Spalding, but said it was the windiest they had ever seen it. We would later check the weather (there’s a station on the saddle run by the park service) to see that there were gusts to 88mph the night I stayed up there.

Here’s me, hiding in a cave during an hour long break me and Andy (guide) took to hang out and rest for the final push. At this point, it was official. We would try for the Exum Ridge, winds permitting. Since Andy hadn’t been there for the classes, I thought I would have to try to convince him, but based on what Stephen said about my performance, Andy had already decided we should go for the ridge. This was a good thing.

And the view out the valley. That lenticular cloud is not a good thing. 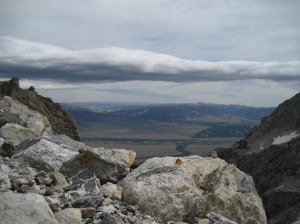 The saddle where we had to get to that afternoon, and Andy getting ready to go.

Here’s home for the night. A ~12’x30′ hut built of aluminum tubes and heavy-duty vinyl. As soon as we got here, I started eating, and didn’t stop until about four hours later. There was no way I’d let a lack of energy keep me from making it up the next day, even not knowing if we’d even be able to try. 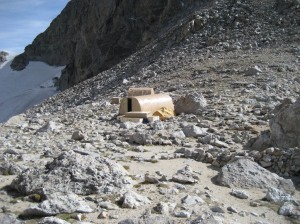 Winds were insane. Sustained 50+ mph, along with the aforementioned 88mph gusts. Peeing was a disaster, as the wind blew straight up. The best bet was to try and find a rock that would catch the pee before it blew up all over you. I think I had better luck than most.

The hut was packed that night with roughly twelve climbers. The guides all have caves in the area that they go sleep in, which I imagine can be pretty exciting at times. One of the people there is the owner of the Spot bouldering gym in Boulder, along with her partner. They failed to make it due to excessive winds, but were spending an extra night rather than make the hike out.

We were to wake at 3:30, and head out around 4. Everyone hoped the winds would calm, but there would be no way to know other than to wait and see. I grabbed one of the corners, which allowed a little more comfort for the evening. People were arranged to make it easier to get out to pee at night. I had no intentions of even trying, so kept a water bottle near-by for pee-bottle use.

The lantern came on at 3:30am. I had noticed that an hour earlier, the winds had stopped blowing the wall I was up against in, and were down to (relatively) gentle breezes. I hadn’t used the pee-bottle, so I scrambled to get dressed and get outside to take care of some business. Breakfast was small – hot chocolate and a clif bar. Thanks to some earplugs, I had slept great. At 4:23, we were moving.

Being late August, sunrise wasn’t until 6:45 or so. That would mean some climbing in the dark. Actually, it would mean a lot of climbing
in the dark.

Here’s a shot of the step across from Wall Street to the ridge. This was done in the dark. Feet go on the down-slanting ramp, reach and climb around, and you’re there. http://www.summitpost.org/images/original/115498.jpg

Here’s a shot of me climbing. This might be the top of the Friction Pitch, but I’m not sure.

Starting to get light as we get closer. Though the winds were pretty calm, it was still cold, and the rock sucked the heat right out of my hands. I would put on fleece gloves and keep them in my pockets until it was time for the next section of climbing.

And here comes the sun. It was nice, as it was a pretty chilly morning. Note the shadow of the Grand stretching off to Idaho.

Andy coiling the rope as the sun crests the horizon.

We quickly reached the Boulder Problem in the Sky, which is exactly what it sounds like – fun! Seconds later we were on the summit, immediately after 7am. The shadow was still stretching off to Idaho. The view was beautiful, and it felt great to be on top of the mountain I’d dreamed of for years. 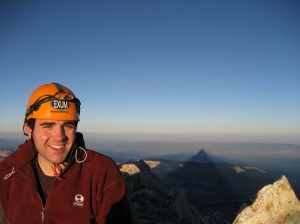 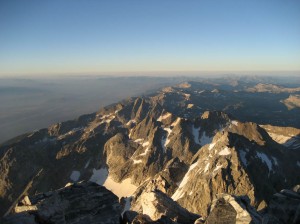 After 15 or 20 minutes, we got up for the descent. The standard descent route for the Grand, regardless of route, is Owen-Spalding. As we stepped into the shadows, it felt like walking into an ice box. We passed some of the people who had been in the hut the night before, and offered words of encouragement. After a bit of belayed downclimbing, it was time for the rappel. There’s a reason we did the large free-hanging rappel, and it was to get ready for this. You can make out the rope if you look closely. I was on a 35m rope, and had about two feet left when I finally got my feet on the ground. Fun!

We were back to the hut shortly after 9am, meaning a hut to hut time of about 4:50. After changing, packing, and lounging until about 10am, the long hike out began. I made it back down shortly before 2pm. I had planned on spending the night and leaving Friday morning, but having gotten down so quickly, I decided I wanted to sleep in my own bed that night. The drive began about 3pm. My dad drove for a while so I could rest and get a few Z’s. I took over after downing quite a bit of pizza at a Pizza Hut, and finally made it back home about 12:30, exhausted and accomplished.