Yesterday was a phenomenal day on Berthoud Pass. Although it had been warm, sunny, and dry for a few days, the forecast called for it to be cold, cloudy, and windy with a chance of snow. Nate, Jay, and I went up early to get in a good day in the backcountry before heading home to watch the Super Bowl. We pulled into the parking lot about 7:45 and met up with a guy from TGR and his girl for a quick lap. Half an hour later it was completely socked in and snowing fairly hard, though the wind was probably down in the single digits.

We made quick time to treeline on the West side of the pass, and planned our route down into Current Creek. 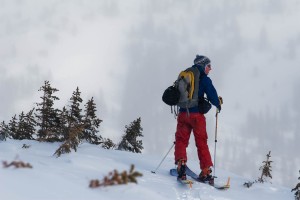 The most fun section of skiing for the day followed on the initial descent from this point. Unfortunately the snow and clouds killed visibility. None of the shots came out particularly well, but here’s one of Nate to show just how poor the visibility was.

Once we got down to the Current Creek parking lot (and after much anger and frustration from the lone boarder in the group after dealing with lots of flat/slight uphill traversing), the skies cleared. Nate, Jay, and I discussed our options and decided to head up into CC, just to get out and do some exploring. After maybe half an hour of skinning, the view was amazing. The cirque to the West looked amazing. There was even a gigantic cornice at once spot that hung out well away from the ridgeline, and looked to be at least 50 feet off the hill below it. I suggested to Nate that he ride off the end of it, but didn’t seem too interested.

It was so warm we all had to stop and delayer.

Close to there is a section called Postage Stamp. It looked like a fun ski, so I pulled up under it and started digging a pit, as I’d been warned that it’s a face that tends to slide. A few minutes later Nate and Jay got there, and started digging pits of their own. Thanks to Nate for taking a picture that makes me look like Humpty Dumpty. 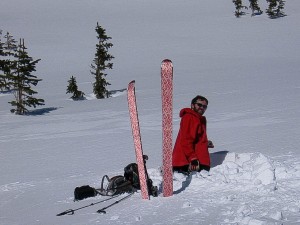 I won’t go into details other than to say there were quite a few very weak layers every several inches down to about 2′. Gently putting my shovel blade in the snow to separate a column is all it took for this section of the slab to break out. 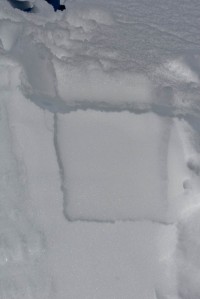 …and now searching for instabilities. 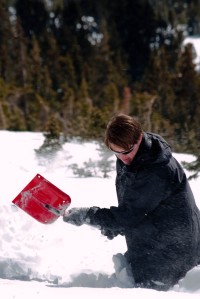 Jay found the exact same thing I did in terms of weak layers and slabs. That block of snow is one layer with totally clean shears on each side. 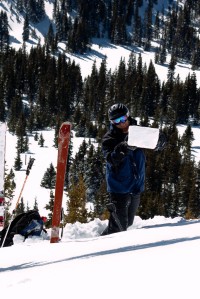 I took this shot as we were getting ready to leave of two guys I had seen heading up Russel Peak from the pass. They had spent the morning going all the way around the cirque. I’m not sure if they were trying to drop in anywhere, but they showed up at the top of Postage Stamp as we were getting ready to leave. I don’t know where they went from there, as I didn’t want anyone bringing down those slabs on us and so we took off quickly. The ski out was through terrible trap crust and we were just glad to be done and out of it by the end.

The forecast all across the state is for heat and sun all week without so much as a trace of snow, so it could be pretty ugly next weekend. If the weather holds out, I’m looking at going and climbing something for the climb rather than the ski in a week.