This past Saturday, BikeDenver organized a group ride along Denver’s bike trail system. It was billed as a metric century (100km, 62 miles) and although it “only” hit 60 miles, it was still a long day full of fun. My legs in particular felt it, as by the time I got home I had done over 70 miles on my fixed gear bike

Here’s the route, starting at the lower of the two endpoints and heading counterclockwise. The northern endpoint is 17th & Vine, where the ride ended for beer and burgers at Vine St. Pub (which, as expected, was delicious). 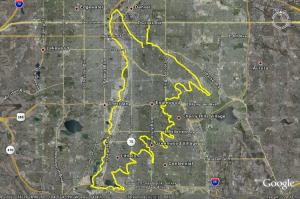 The day started out at Gary’s house just NE of Wash Park. The flyers said show up by 8:50 so everyone could sign in and be ready to go at 9. We didn’t leave until almost 9:30, but that’s my only complaint. Here is roughly half the group, raring to go. In all, roughly 40 people showed up.

Here’s John from Denver Cruisers on an 8′ long cruiser. Believe it or not, he was in the lead pack the entire time. 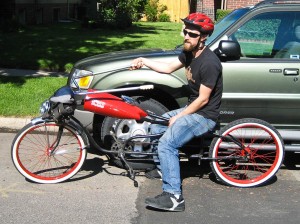 This was the first stop. Assembled here is what started out as the fast group, but its numbers would steadily drop as the day went on. 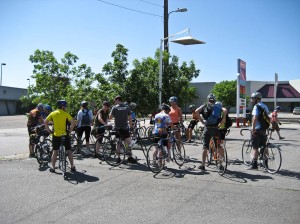 The lead pack heading down a trail that I can’t remember the name of, but still fairly early in the day. The guy in the lead is Joe. I’m not sure how old he is, but he’s certainly up there, and was leading the fast group on a fixed gear bike. 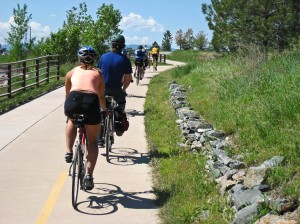 A look back at the train of people. 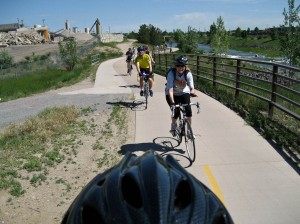 Looking out over a small lake, photo taken in-motion on the bike.

Not much later we hit the 470 trail, which took us to the unpaved gravel Highline Canal trail. The four of us here (three in the photo and I) would end up as the only four to make it to the end as the lead group.

Rolling along the gravel was tons of fun. Here is John (left) and Alex (right) on their cruisers, hanging up at the front. Amazingly, the leaders all day consisted of five fixies and two cruisers, and not a derailleur in sight.

Here we are going through Greenwood Village, where MegaMcMansions backed up to open space. I could see the towers of the DTC not far ahead, and got excited to get to Vine St.

This is the last time the lead group had any these kind of numbers. We waited and waited for the slow group, but they never showed up. We would eventually take off, and Alex got a flat shortly thereafter. It was a half-hour debacle fixing it, and just as we were about to go, the first of the slower group started to come into view.

We booked it, connected with the Cherry Creek trail, went through Cheeseman, and finally arrived for some delicious food and beer. After the burger, chips, and beer at the restaurant, I made up another burger at home, fell asleep by 9, and woke up starving on Sunday. It certainly was a great ride with great company.