“I want to drink SO MUCH BEER.”

It’s early Saturday morning and Nate is talking about how many pitchers he’s going to order when we get to the Dark Horse. Most of Denver is still asleep. 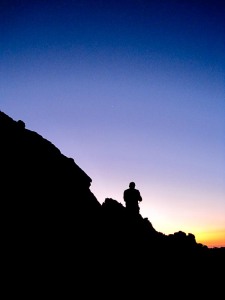 To be fair, it had already been a long day at that point. I’d been up since 11:15pm (after a 4 hour nap). Nate had the luxury of sleeping in an extra half hour. We were on our way down from the summit of Longs Peak, after sprinting up the Homestretch to catch sunrise by less than a minute. 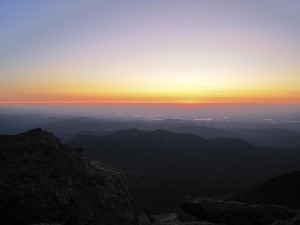 It was a great morning. Despite only getting a few hours of sleep and waking up before most people we know had even gone to bed, we were able to keep a fast, comfortable pace all the way to the top. Here’s Nate enjoying the view as well as his chapstick during sunrise. One person passed us on the way up and was waiting for the sun to come up on top, but had to head down before it did, as he was getting too cold to stand around despite the total lack of wind. 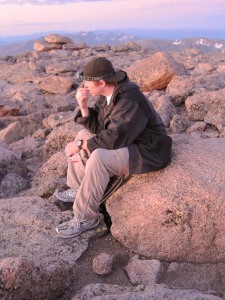 And a look over to Meeker. 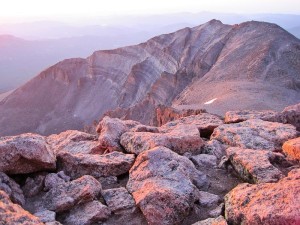 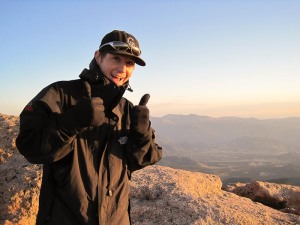 The view to the Northwest. 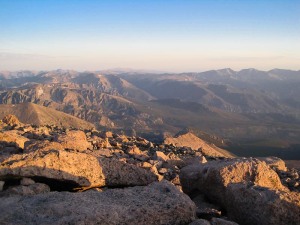 The view across the Narrows on the way down. We would pass a couple people through here, but not enough to cause any slowdowns. 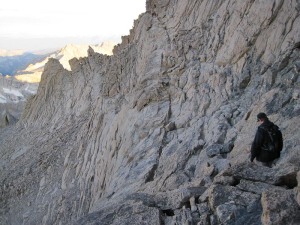 When we hit the Trough, we saw the train of people who’s headlights we saw marching up towards the keyhole a couple hours prior. 30 minutes later on the way down and we would’ve hit a major logjam. I counted 48 people in this photo, and the top of the trough isn’t even visible. There are dozens upon dozens of people below us. 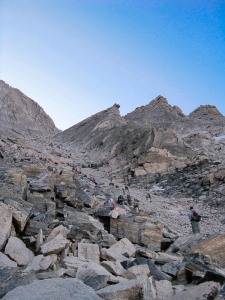 We were asked by countless people, “how much longer to the top?” Nate told one guy who asked low in the trough “about an hour.” He was dismayed as he had been told an hour by the guy who left ahead of us roughly half an hour earlier. Nate’s guess was accurate (if not on the low side) based on the guy’s current pace, but of course not what he wanted to hear. The estimates of course got longer as we progressed, until we neared the keyhole and the response became “about as long as it’s taken you to get this far.” This is really not what people wanted to hear. It actually became entertaining to be the mountain’s unofficial demoralizers to people with shiny new gear and absolutely no idea what they were doing.

We had a blast scrambling down, and racing up small rock formations that were conducive to sprint-scrambling (or as Nate would call it, “spiderman shit”). One person even remarked that Nate was “dancing on the rock.”

The boulder field was an absolute blast, and we discussed the intricacies of what differentiates leaps, bounds, and simple jumps, of course with countless examples. Of course, at what point can you draw the line between a “leap” and a mere “bound?” If you take a leap but shorten it by a millimeter each time and continue repeating, at some point it will cease to be a leap. But where? Just look at statistical usage of the word “leap,” decide using that average, end of story. Oh snap, philosophers! Did Mike just totally school you with his statistically-based descriptivist approach to semantics? IT APPEARS THAT HE TOTALLY DID!! It also appears that he’s speaking in the third person because he’s so impressed with his awesome self!
[thanks to Ryan North for inspiring this passage]

After the boulder field, we tried to keep up a good pace as both of us wanted to be done, and go get our beer and burger at the Dark Horse. Hey look, a heap of rocks! 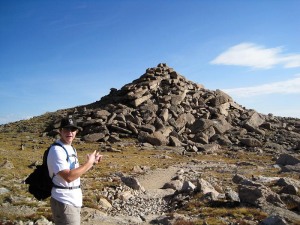 And a look back at Chasm View. 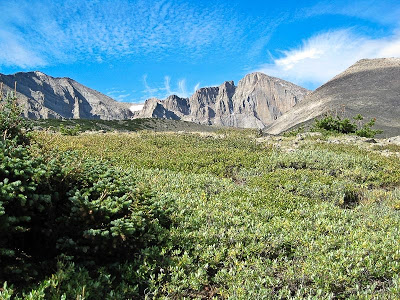 Sun’s out, guns out! 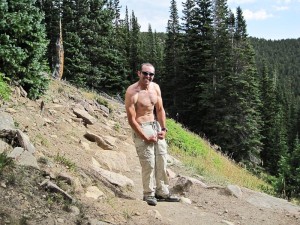 Time counting stops other than the summit was 7:40. Total time right at 8:20, which is substantially faster than I’ve ever done the trip, and my average heart-rate was only 118.

The Dark Horse was great, with a hickory bacon cheeseburger w/ fries for only $5. I love that place.