I went up to Jones Pass on Saturday for a little bit of exploration and skiing to burn off the stresses of the work week. Cast of characters, starting with Aaron:

And his friend, Drew: 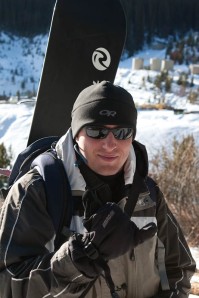 When we met at the lots in Morrison for the ride up, there was a rather large group milling around. Just our luck, a CMC group decided to go up there as well (and if you’ve been reading a while, you might remember that the last time I went up with Aaron, we ran into a rather large CMC group).

They pulled in immediately behind us, so we got ready and got on the move ASAP.

After, oh, thirty minutes or so of skinning up an occasionally-dry road, we got to the main trailhead, and were greatly disappointed with what we found, especially since Butler Gulch (which is RIGHT THERE and at lower elevation was so good last week before the most recent storm). 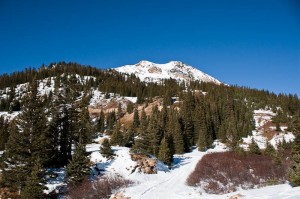 So further along the road we went, in search of higher elevations and more snow. We found more snow, but not by much.

If you look closely, you can see the elevator shaft to the Henderson Mine, which goes down roughly a mile.

After a rest break and a little bit of sun exposure and heating, the snow got terrible for climbing. It rapidly softened, to the point that skinning or edging was impossible, with the top few inches sliding off an extremely hard layer underneath, hard to the point that my new BCA snow saw was having trouble with it. 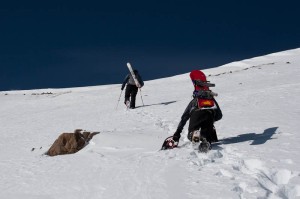 Onward and upward we went, to the Continental Divide at roughly 12,400′. It was windy but the temps were pretty nice. There are no photos of the skiing because it was absolutely terrible. Variable soft/breakable crust all the way down to the road, then the road was narrow, bumpy, frozen hardpack with intermittent dirt and rock patches. Oh well, still a good day out, and a good warmup for the season. We’ll end with a parting shot from the Divide: