As most of you are aware, I’ve been skiing and climbing in the backcountry for a few years. At first I didn’t know all that much about snow and avalanches, and looking back I’m fortunate that I didn’t do anything TOO stupid. As time went on I’ve learned more about avalanches, largely thanks to Friends of Berthoud Pass with their very inexpensive avalanche safety class. Despite hearing that it would be mostly review given my level of experience, I decided it was finally time to take an AIARE Level I course. Lauren and I settled on a three-day class with Crested Butte Mountain Guides in Crested Butte over this past weekend. I only took photos during the field sessions for obvious reasons, and if you want a full-course synopsis you can look here, as I won’t be going over the whole thing.

Friday’s field sesion consisted of checking beacon function, followed by performing beacon searches. As you can see, it was snowing. Jayson (lead guide and owner of CBMG) would later inform us that according to remote instruments, every time we went out into the field it was snowing at a rate of 3″ per hour.

The group had a decent mix of experience from total novice to relatively experienced, but everyone was fairly strong. Despite having to break trail through feet of snow, there were no major holdups, and it was all smiles around.

Of course, due to the intense snow, we were in near-whiteout conditions most of the time we were out.

After we plowed through a few feet of fresh snow for a while, it was time for beacon searches.

The heavy snow would later prove to cause problems driving, when I gently found my way into a snowbank (along with a few other people) after a gust of wind blew enough snow to completely cover my windshield. Fortunately we were all equipped with shovels, and were back on our way after a few minutes. The snow continued through the night, and we woke to find a substantial amount of snow on my car (the resort reported something like 18″ that morning).

Saturday had us going out to dig pits to help in determining stability. I would have liked to get more into the pit-digging and snow science side of things, but that’s more of a Level II thing. Avalanche danger was high on all aspects and elevations both days over the weekend, and there was an avalanche warning in effect as well, which limited our terrain options considerably. Once again, we were having to trench through feet of snow to get anywhere.

We worked our way up to just below an aspen stand to get digging.

The snow was so unstable that a major collapse occured while digging the first pit; it was loud, echoed, could be felt through your feet, and the failure was visible in pits some distance away. Days like this, it’s better to stay home; when that’s not an option, you’re forced to stay on slopes well under 30 degrees, which is where we spent a couple hours digging around in the snow. On the ski out, it was so deep that pointing skis straight downhill still wasn’t enough to keep moving.

The final day of the class, we had to plan and go on a tour to complete the course, despite the high avalanche danger. This presented an excellent opportunity to force planning multiple routes and completely avoiding any slopes steep enough to slide. Trailbreaking was the same as before, if not worse, but it was fun all the same. Visibility cleared up briefly for this photo, then socked back in. 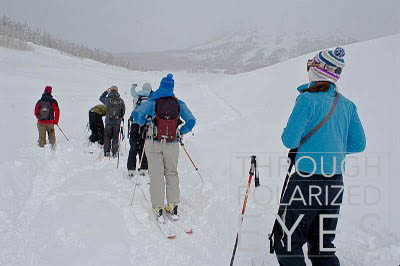 After skinning for a couple hours up through the trees, we dug another set of pits before skiing back to the cars. Despite being forced to stick with low-angle terrain, a few fun turns were had, along with a couple face shots. If stability had been better, it would’ve been full-on whiteroom conditions on slightly steeper terrain. At the top of our ascent, Lauren had issues trying to turn around in the deep snow. 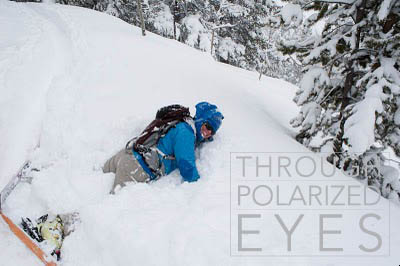 In all, the class was great, and I highly recommend it
to anyone interested in building a foundation of knowledge about snow safety. CBMG was great, and I plan on heading back for Level II next year. And now, a scenic parting shot. Until next time..

One thought on “Becoming Educated in Crested Butte”