Lauren and I took a long weekend to go see friends Frank and Brittany in Crested Butte. We got an early start, leaving Denver at the crack of 9:30 and made it to Monarch ready to ski at 12:30. We didn’t check the snow report, but there was some fresh; combined with the winds, it skied rather well.

It was a nice warmup for the weekend, and a pleasant surprise to get a little untracked powder skiing on a leisurely afternoon.

After a couple hours, we decided to get a move on before it started getting dark. A couple hours is all you really need at Monarch, and we left with smiles on our faces.

It was a pretty quiet evening after we arrived, which was good as we woke up to a surprise powder day with 9″ on the snow report and more coming through the day. Lauren and I gorged at our now-standard hillside breakfast buffet before getting started on a phenomenal day at the area.

We couldn’t have timed our trip any better.

Tons of great terrain was open, and we met some new friends – familiar-looking skiers from Loveland who also happened to be friends of Frank and Brittany, and in town for the weekend. 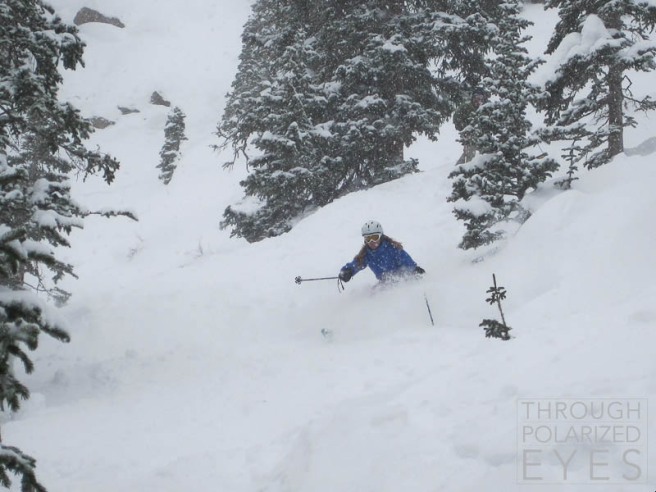 Charlie, Carol, Lauren, and I took a long lap out to 3rd Bowl late in the afternoon, which had a pretty tight entrance and some great steep turns. 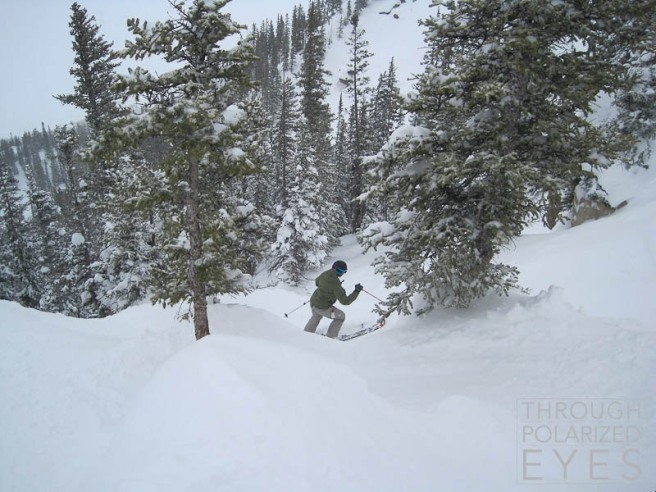 On our way out to one last good lap, a bright pink and purple blur blew by us shouting a very excited “Follow me!” Follow her we did, to Sock It To Me which had opened late in the day. Frank and Brittany were waiting below, cameras at the ready (photos of that run here) when Charlie shouted down that where we were looked good, and that we were going to drop in – and was met with two very urgent “NO!”s. Apparently the line below us had slid to the ground in the Christmas/New Years storm cycle, and had a ~15 foot mandatory air to super-thin cover. We had a mellow run out to the base afterwards and stopped for a couple celebratory beers before dinner.

Lauren and I were up at 7 for another huge breakfast, and realized after getting back that the temperature was around zero, delaying our start for the day by a couple hours waiting for things to warm up a bit.

I was wishing for my sun hat, as it was about as bright as it gets. 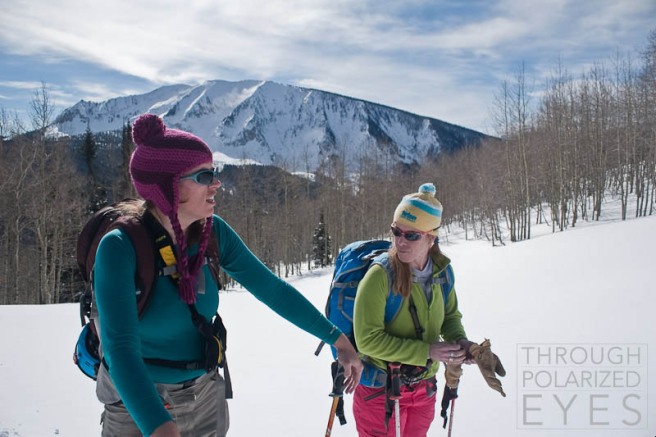 It was a beautiful bluebird day, with comfortable temperatures and a gentle breeze.

Even with such a cold start to the day, it was hot on the skintrack until we reached treeline. 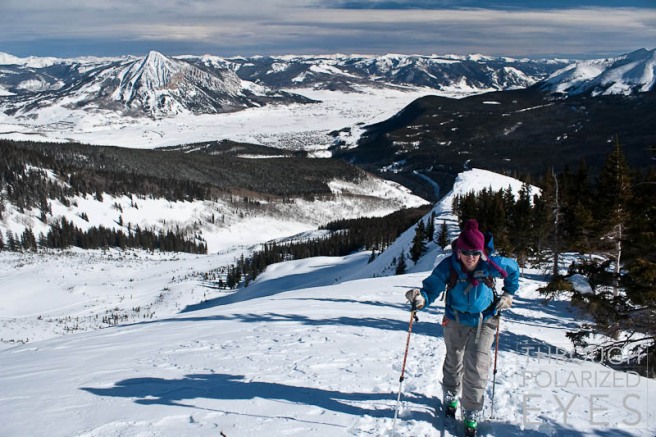 With the top of the resort below us, it wouldn’t be long until we reached the top. 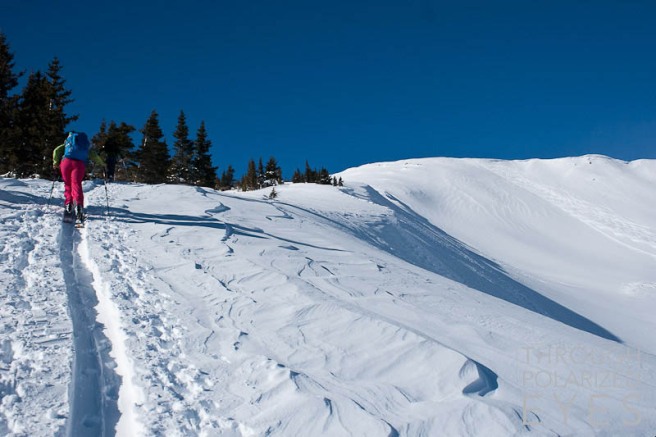 Lauren started to fade, but a well-timed Snickers warded off the imminent bonk and kept her moving upward.

A few minutes later, Lauren topped out on her first summit with skis. 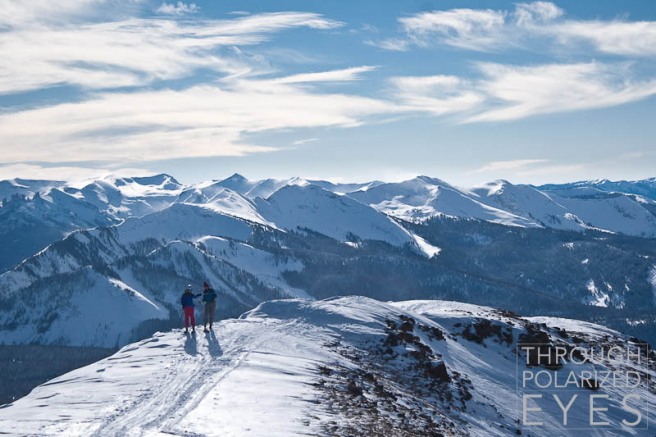 Though a bit windy and cold, the views were amazing. We only stuck around for a few minutes before heading down, but I could see that the Elk 14ers are going to be in great condition this year. The first few turns were a bit crusty, but things turned perfectly creamy after only a couple hundred feet.

Brittany brought a pretty heavy setup (Katanas with Dukes), but the weight looked to be worth it for the down.

It was smiles all around.

Of course, what kind of backcountry ski outing would it be if Lauren didn’t take a seat in the snow and have a few laughs about it?

Brittany killed it on the down. 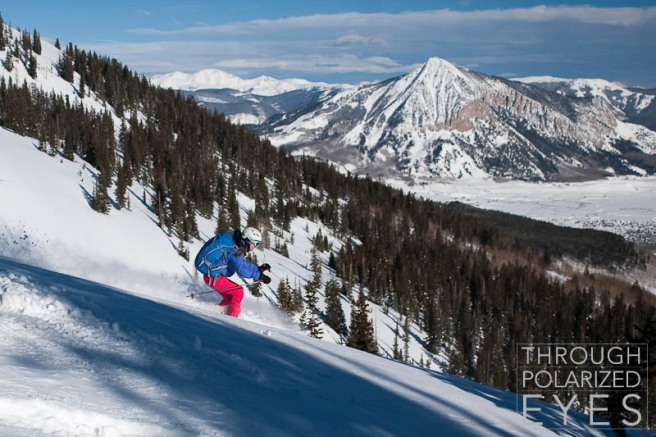 There was no fighting for powder turns this day.

Frank was testing out a new 20-year-old set of skis, which seemed to do well in the creamy snow

Skiing through a mature aspen stand is one of my favorite things.

Sadly, all good things must come to an end. We hit the track back to the trailhead, packed up, and hit the road back to Denver. I can’t wait for the next trip to Crested Butte. 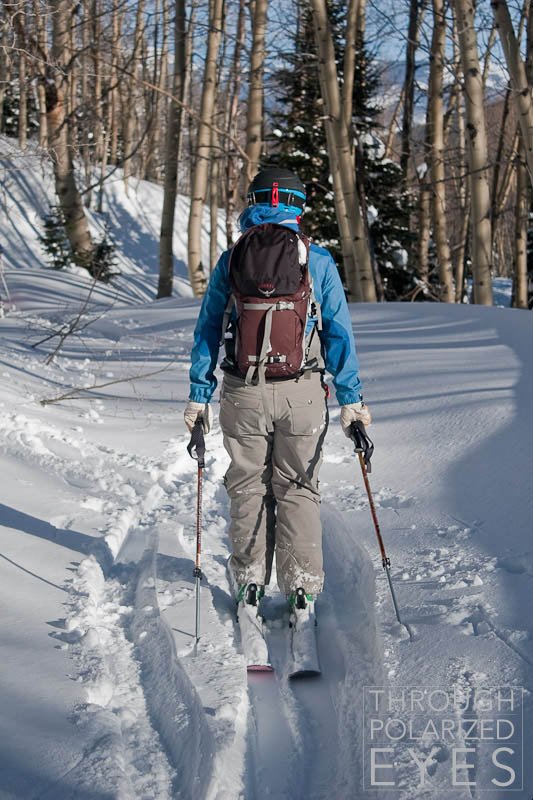 One thought on “A weekend in Crested Butte”