After a couple years of intending to do some rando racing, I finally got started this past Saturday at the 12 hour Sunlight Endurance Challenge. Brian up in Glenwood got me a spot on the Glenwood Insurance team, and at 8am Saturday morning we were off to the sufferfest. My strategy for the race was as cunning as it was daring – start slow, and slow down from there.

Brian went out hard the first few laps, then had to stop to duct tape over some hot spots. I had to do the same not much later.

Jim was racing on the “just for fun” team, using snowshoes for the up and a snowboard for the down – but was still plenty fast and spent quite a bit of time hiking along with me. 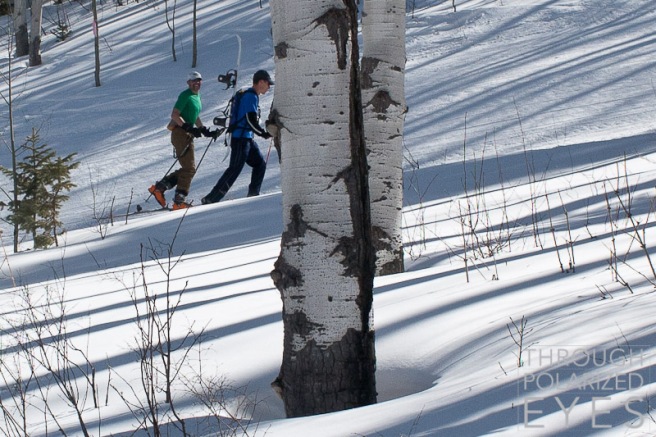 It was a beautiful day, warm and slightly breezy down low but very windy up high. My short-sleeve shirt and arm warmers combination worked great all day.

As planned, I slowed down through the day.

I had some boot-induced foot pain that forced me to take my boots off and sit in the lodge for an hour, but after that I was out at a nice consistent slow pace, with a couple more brief de-booting breaks. 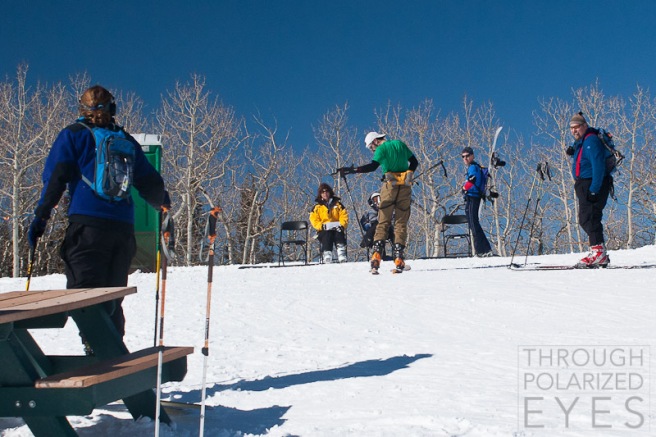 What was nice corn during the day became an icy mess as the sun set, so despite my amazingly bright amoeba lights, I was forced to ski slow on my one night lap. It was very enjoyable, despite the gusting winds. Race volunteers had tied up glowsticks to trees the entire way along the course on both sides, and it almost felt like skiing down a runway. Brian was waiting for me to come in from my 11th lap to see if I could do one more, but I was in no condition to head back up again. I was assisted in getting my skis off, and then lied down in the snow before being helped inside for some food and drink. Brian finished up lap 12 within the time limit, and seemed to be in much better condition than I.

Thanks to Lauren for taking all the photos in this post, and for the invaluable support during the race, to Sunlight and all the volunteers and ski patrol for putting on a great event, and Glenwood Insurance for having me on the team.