I shall be telling this with a sigh
Somewhere ages and ages hence;
Two roads diverged in a wood, and I —
I took the one less traveled by,
And that has made all the difference.

Today I went after Grays and Torreys Peaks. Hit the trailhead about 10:10am. The normal route up is basically a class 1 the entire way. I had planned on just doing that, although had the idea of taking the non-tourist way up in the back of my mind. That alternate route goes up kelso ridge, which is a big ridge connecting Torreys from a mountain called Kelso. Everything I read described it as a class 3 route.

Here’s the start of the ridge, at the bottom of the saddle between them:

Here’s a little bit up the ridge – a very little bit. If you look carefully in the middle, you can see a guy or two. There were 6 or 7 of them going up Kelso Ridge for a bachelor’s party thing. 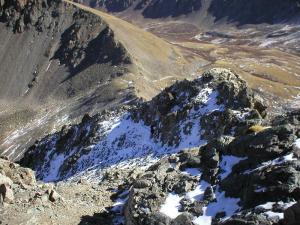 They had NO idea what they were getting themselves into. For that matter, neither did I. However, they were going ridiculously slow – move for a minute, sit for 5. I wouldn’t be surprised if they need a helicopter rescue sometime tonight.

A while after I left them, I saw this: 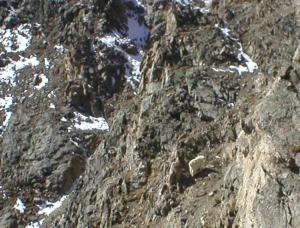 As you may be able to tell, it’s a mountain goat. Fatigue/exhaustion and altitude, on their own, can both affect judgement and perception. Together, they are even worse. When I saw two white fuzzballs moving out of the corner of my eye, something popped into my head. “Oh my god, polar bears, they’re going to eat me.” Yep.

There was a lot of very loose, very steep, and very dangerous climbing. This went on for a couple miles. That was nothing though. This was waiting for me at the top:

That’s taken right after crossing it. You go on the left side, jamming your hands into cracks in the wall as hard as you can. If you don’t, there’s a couple hundred feet of air right underneath you. Clearly, it would have been safer to turn back, but that wasn’t really an option. About 10 minutes into the route, you’re essentially committed to going to the top, because you have a 20′ near-vertical wall to scale.

Of course, no time for much rest, it was 1:45 after I drank water, ate food, and otherwise caught my breath, and I still had another 14er to bag. 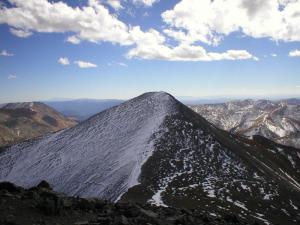 Fortunately, there’s only about 500′ of vertical drop and then you go back up, and I was up on Greys in about 45 minutes. The view was unbelievable.

Me with godawful hair on top of Greys, with Torreys in the background:

Whoever
said that was class 3 needs a kick in the head. It was a 4, with some possibly low-5 sections.

My knees hurt, again. I’m exhausted. Next week: maybe nothing, maybe Pikes Peak (26mi round trip, about a mile and a half vertical gain).