Some of you may remember last year’s report where I intended to climb Mt. Bierstadt, cross the sawtooth ridge, and go up Mt. Evans, but turned around after Bierstadt. Well, I finally did it, and I have no intention of ever going up there again.

I drug myself out of bed at 3am, ate, and was out the door just after 4. I got to the parking lot for the trail at 5:30, but apparently spent so much time screwing around and getting ready, I didn’t get on the trail until 6. It was a very nice morning, and this was the first thing I saw on trail. 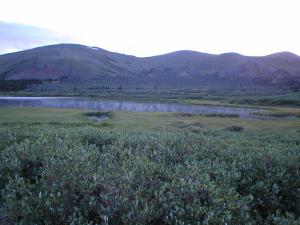 I then got a nice shot of the ridge I’d be crossing before too long, backlit by the rising sun.

And what’s this behind me? Oooo…

No pictures on the way up to Bierstadt, because it’s boring and I’ve already been there twice. But from the top..

And my ultimate goal for the day, Mt. Evans.

But it wouldn’t be easy, especially since I had my dog along, and this is how I had to get there: 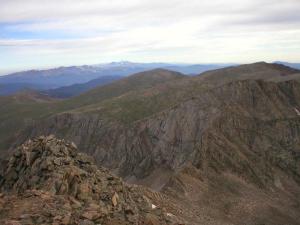 All in all, it wasn’t too bad. I had to pick up my dog and carry her short distances in a few places, but she handled most of it on her own. No pictures from en-route there because I was too concerned with moving and keeping my dog from falling to stop for pictures.

Towards the end of the route, you switch over to the west side of the ridge, so there was a good photo op there.

And the way out of this mess: 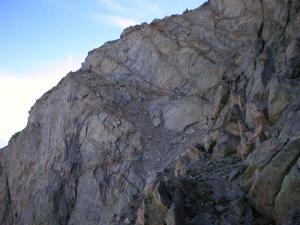 A nice, loose, steep, highly exposed exit ramp. Outstanding. Well, we made it, and here’s the view back across what we covered: 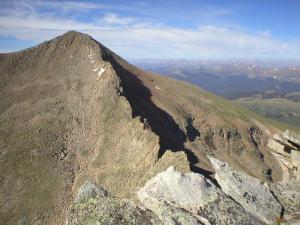 A beautiful view from the Sawtooth: 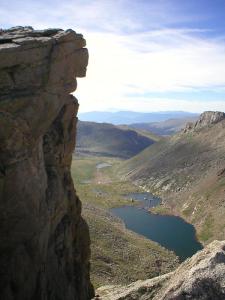 While I was here, I figured I should go hop on Mt. Spalding, since it’s a high 13er and I didn’t want to have to come back for that, if I ever decided to start after the 13ers. It was also only about 20 minutes off my route. No pictures, since it was boring.

I finally hopped on the ridge over to Evans, and trudged along for an hour and a half, maybe two. It was long and tiring. And when I got there, I was blessed with this beautiful view:

Anyway, since the cool part of the day was the Sawtooth, I got a picture of me and the dog with the ridge behind us. Everyone was shocked that she made it across the Sawtooth ridge. 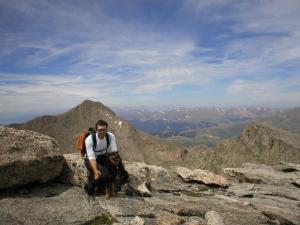 After about 10 minutes of heading back from that point, I was able to see just how far I had to go. 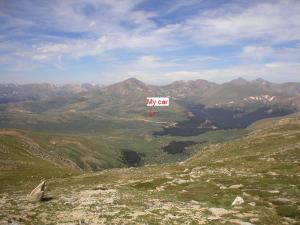 Going down the valley that drops down just in front of me in the picture there is very steep, wet, loose, and all around crappy, but it’s the only real option. I’ll spare you the uglyness, and instead focus on the cool stuff. 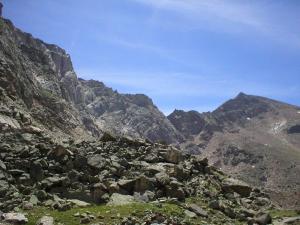 After getting down that valley, I spent an hour or more bashing willows through a swamp. My shoes got soaked with swamp muck, and at times the willows were over my head, with no game trail to follow, so I just had to bash through while pulling my dog along.

Total Distance: Approx 12 miles
Difficulty: Mostly class 2 with a decent amount of class 3 and even a couple class 4 moves to try to get around some of those goddamned willows
Gross elevation gain: approx 1 mile
Car->Car time: 7h58m