Yes, it’s been a while since I’ve made one of these. No, I haven’t been completely idle, just busy with work, and I haven’t done anything interesting enough for a thread. Plus, my camera sucks.

So, the story. Yesterday I had to be at work before 5am to make sure we were ready for a concrete pour. Sucked. Went to bed at 8pm, woke up at 5:30am today fully refreshed, so figured it’s a little late but what the hell, I might as well go climb something. My dog needed the exercise anyway, and I hadn’t been mountain climbing in a few weeks now. Got up, coffee, quick breakfast, get dressed, and go.

The trailhead is at 11,240′. I had forgotten how cold high alpine valleys can be in the morning, even in July. The sun was making its way up at this point, with pretty spectacular views.

The sun crested up over the ridge not much later. 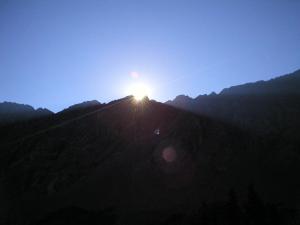 I was getting pretty damn warm at this point. Apparently fast hiking with a 30lb pack generates a lot of heat. I was wearing my new REI Mistral pants, which seem to be some pretty great 3-season pants. The thing is, the 3 seasons are fall/winter/spring. Way way way too warm for a summer day with calm winds. 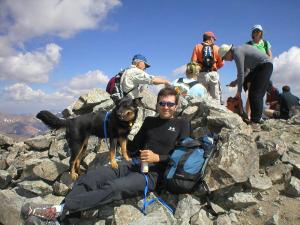 In my hand is a New Belgium Trippel, an excellent beer that weighs in at 7.8% ABV. I had two of them this day, roughly equivalent to four american light beers. I enjoyed the view as I drank my beers for a half hour or so.

For some reason, I was able to largely ignore this, which was almost directly behind me:

After a snack, I got up and meandered over to Grays Peak. Nice view from there too.

But then I looked up, and wasn’t too excited about what I saw.

The clouds were swirling and building very, very quickly, so I beat a hasty retreat.

Anyway, I rigged up a google earth file of my track, taken from my gps. I thought some people might appreciate it so [url=http://beanmj.googlepages.com/gtbeer.kmz]here[/url] it is. All my future HAI threads should have these tracks along with them. I’ve got one planned for the near future that should be pretty sweet to look at.

Yes, I’ve done these mountains before, and reported on them with a much more interesting route. Deal. 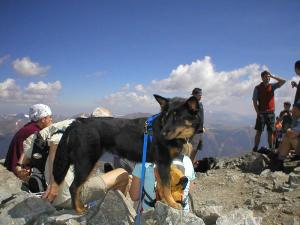