Today I attempted to climb Quandary Peak, 14,265′. During the summer, this is a piece of cake, little more than a 3 mile walk to the top. However, it isn’t summer right now. Far from it, the area got a dumping of fresh snow last night, which turned out to cause more trouble than I had expected. Windchill for the time I arrived was predicted to be right around -30F, and I don’t doubt for a second that it was. 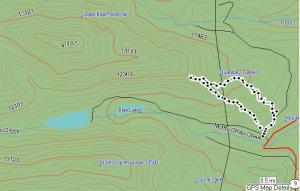 I took this very very soon after getting out of the car: 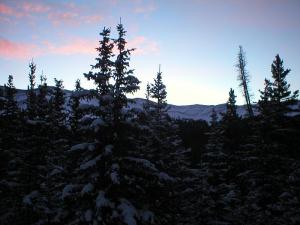 As I was moving through the woods, I heard some elk calls. Never saw them, but still pretty cool, and far preferable to the mysterious meow I heard on west spanish peak.

A few minutes later, the sun came up over the hills: 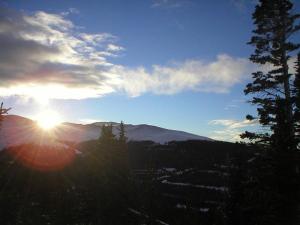 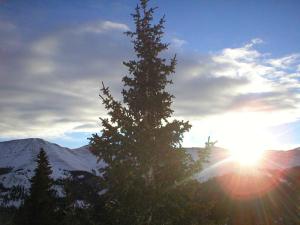 The snow on the “trail” hadn’t been touched in a while – it showed no signs of anyone being through there, despite all the wind being blocked by trees, and lots of the snowfall caught by branches. Here’s starting to come out of it, and that thing that sort of resembles a trail is where I trudged through the snow: 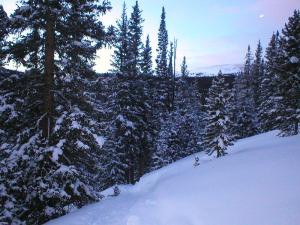 While I was in the heavy woods, I was mostly able to stay on top of the snow with my snowshoes and poles. Every now and then I’d go in some but it wasn’t horrible. That all changed as soon as I got out of the woods, and into this: 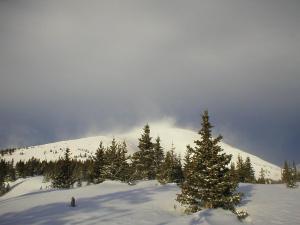 Beautiful, yes, but with almost every step came sinking, anywhere from my knees to my waist – and that was while watching out for the really deep areas.

I started to get up higher, which means stronger winds but also generally less deep snow. Things were going well, until the gusts got stronger and lasted longer. Eventually, the gusts turned into the sustained winds. I looked up, and saw some very dark clouds moving in very quickly. The weather forecasted an opening of a few hours between storms – apparently it was wrong.

When this became all I could see, I knew the weather wasn’t going to let me on to the top of that mountain today. I turned around and literally started running down the mountain: 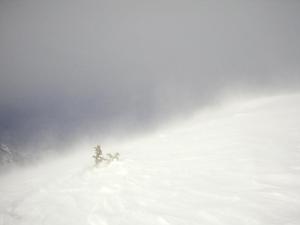 A short while later, I came across some prints I laid down maybe 15 minutes earlier. This is all that was left of 2-3′ deep digs in the snow: 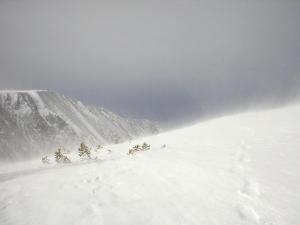 A couple minutes later, I was tired, and the weather seemed to be letting up, so I stopped for a minute. I noticed a few birds hopping around these trees, wondering what the hell they were doing up there. When the storm caught up to me, about 30 birds took off out of those couple trees: 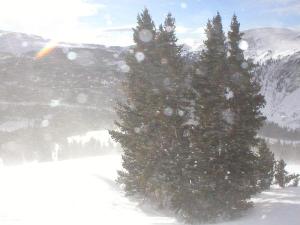 Well, in the time it took to take out my camera and get a picture, the storm caught up with me, as you can see. I watched these clouds to gauge the storm’s progress, and if I hadn’t seen it with my own eyes, I wouldn’t believe how fast these came tearing across the valley: 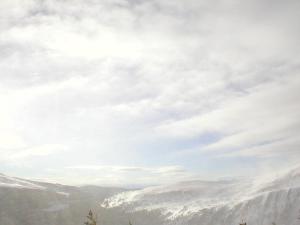 I eventually got clear of the storm (dense enough trees), but as you can see in the track, I was at least 1/4 mile away on my descent as I was on the ascent. I took a much more direct route, that happened to have MUCH worse snow. Much of the time on the return trip, I was buried up to my chest. When I was about a 1/4 mi from the car, I took off my snowshoes, strapped them to my pack, and just charged through the snow as best I could. It sucked, it was exhausting, and my clothes filled with snow, but I got back, disappointed that I had to turn around when I was half way to the top.

Sorry I couldn’t provide any summit pictures, those’ll have to wait for summer. I’m still waiting for the weather to do Pikes Peak, with any luck it’ll be nice e
arly next week.