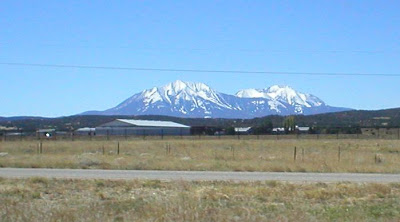 Round trip distance ended up right under 7 miles, according to my fancy new gps. The trail was questionable at best, and I spent roughly 3.5 miles trudging through unbroken snow. Here’s the view from a little ways in (ascent route is the big ridge that’s visible between the trees): 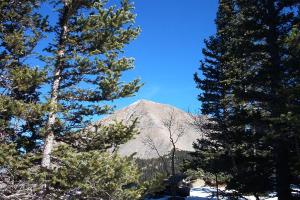 When I was moving through the trees, I heard something meow at me. I didn’t see anything, but I know for a fact that I have no interest in meeting anything that lives at 12,000′ and meows, so I grabbed some branches and banged them together for a little bit.

Here’s “treeline.” You can kind of see a trail there. That’s FAR better a trail than what it turns into in a couple hundred feet.

That’s right, snow-covered in october, barren at the end of december. I was kind of pissed about that, because snow could have been a lot easier to go up than this:

Somewhere around 1,500′ from the top, I saw a couple Rocky Mountain Bighorn Sheep. One male with the big curling-around horns, and one female with small ones. They looked at me for a minute then wandered off. There were also the usual marmots scampering around the rocks all over the place. There was a little snow up top though, which wasn’t so much snow as white ice. I had to grab rocks and bash them in for handholds so I wouldn’t slide off the mountain.

I finally made it to the top, and found that I was the first to sign the register since December 2, 2005. Of course, I ran into some jackass that shakes hands like a woman on the way down. Still, it was nice to be the only one out there for so long. I was alone for all but 30 seconds or so of the 4.5 hour trek. Here’s a couple kickass pictures from the summit. The mountain range there is the Culebra Range, which has one 14er in it, and is all privately owned. There are arrangements that can be made, for $100 per person. I’m looking into things. The other picture shows the radial dikes, with the San Juans in the background. 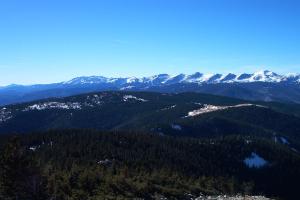