This week I had been planning to go do something reasonably epic with a guy from work, but he backed out so I stuck to something closer to home and shorter, James Peak via St. Mary’s Glacier. This would afford me the time to take a nap and look at houses before seeing the girlfriend. I woke my ass up at four in the morning, was on the road at quarter after five, and on the trail at quarter after six.

As usual, I famously lost the trail (never been there before) and ended up climbing a reasonably steep snowfield instead of the glacier. Got a nice view of Evans at 7am. Still looked to have a reasonable amount of snow.

As I got up over the hill I was climbing, I found a park some sledneckers had setup. Not at all what I was expecting.

Picture of where I wasn’t going, but looked to have some pretty sweet lines available: 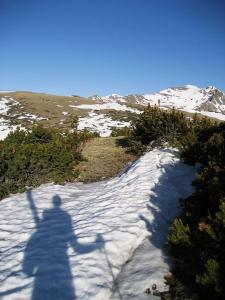 Bancroft on the left, James on the right:

Above 12,000′ or so I started seeing these tiny little flowers. The flowers themselves were less than 1/4″ across.

After much elevation gain/loss and postholing through unconsolidated snow fields walking in my T2Xs (because I didn’t know where I was going and never bothered to see if my old skins would fit my new skis – they didn’t), I made it to the summit. An old married couple got there just as I did, and they said they’d tele’d James Peak every year for 25 years (except in 2002, they said there hadn’t been enough snow). The woman used T3s, and I think the guy had leather boots. I was amazed at how totally they killed it on the way down. I wish I’d thought to get pictures of them. Anyway, summit shots.

As I was getting ready to go, a guy who said he’d smoked a bowl before starting up showed up. We chatted for a few minutes. He was definately stoned. There was also a pit dug on the summit where it looked like someone had bivy’d for a night recently. Shot of my tracks + those of the old tele-rippers:

Mine are the big wide ones. The two people there are the married couple. Tons of fun on some great corn. I straightlined the bottom hundred feet or so to make it out across the flats, and got pretty damn far. On the way out, I found that the CMC was having some avalanche/glacier class. There had to be at least 50 people there. Here’s a small handful of them: 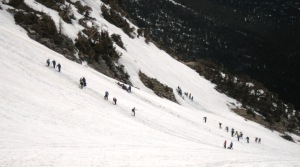 All in all, a great day. 4 hours 45 minutes car to car, a bit of sunburn, and some great corn. I might have one more day on skis next weekend, but after that it’s probably going to be time for dry adventures with boring descents. Oh well, such is life.