New Belgium’s Tour de Fat came to town today, and as usual, it was a blast. Although I wasn’t thrilled about having to wake up early (for a Saturday, after going out), it was definitely worth it. Despite the forecast for rain, plenty of people turned out.

We arrived at 10, just in time to get started. This is one of the first awesome contraptions seen for the day, and I have no idea how they got up and going on it.

The sun broke through the clouds for a while, which made for a great bike parade. 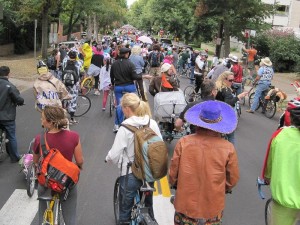 The hill down 12th to Lincoln made for great powersliding, and riding through the streets of downtown surrounded by bicycles is, as always, awesome.

After winding around town, it was back to City Park for the festivities. They held a ride-slow “race,” last person across the finish line (without falling, stopping, or trackstanding) wins. I made it into one of the six heats (of six), and almost got to the finals, but fell. The winner got a totally sweet belt, which I am now envious of.

Sara and I in front of the stage.

I’m not sure if they were official or not, but there were some Twinkies guys there. I think this guy was having some issues.

And the dog from the Denver Cruisers ride was back, with a new outfit. 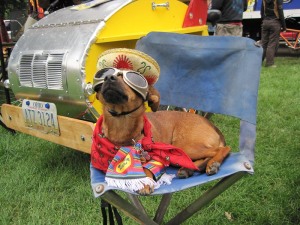 The rideable art arena was back, with some incredibly cool (and ridiculous) machines. I really want one of these: 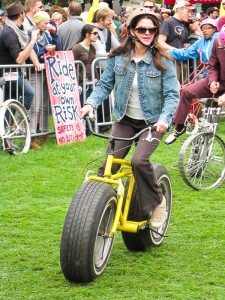 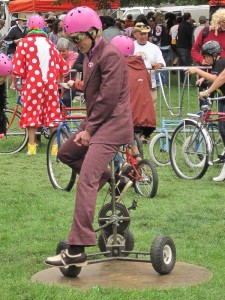 This thing was pretty much unridable by anyone.

And then there was a bike with rear-mounted handlebars. Interesting.

And who could forget the sneaker-bike?

And here are the Four Horsemen of the Carpocalypse, in preparation for a bike giveaway. 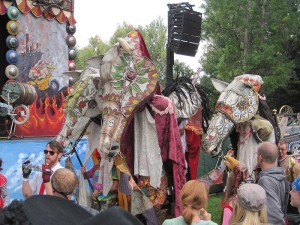 We left before they did the trade of a car for a commuter bike, which was a good idea as it started raining and got pretty cold on the ride back home. Good times.