This is part 2 to yesterday’s part 1. We decided to do another lap (how could we not?), and things just kept getting better. 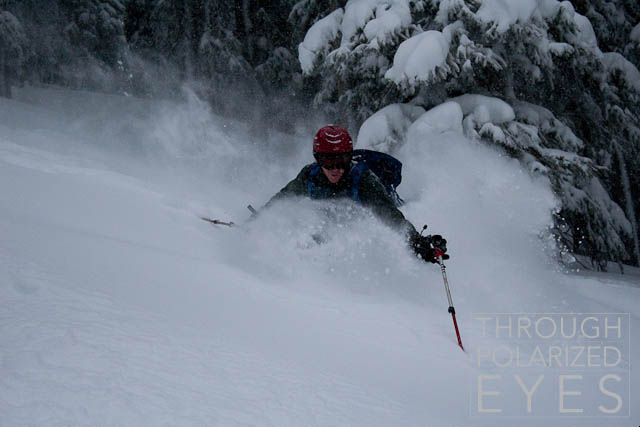 The snow couldn’t possibly have been better.

Of course, if you launch off a road cut, you can get a bit cold.

Speaking of road cuts, every time we rolled over one, the snow cracked and failed. The CAIC rating for this aspect and elevation was “low,” but our findings certainly didn’t agree. Anything steep enough to slide did, which is why we stuck to terrain with a max of 28 degrees (not counting the small road cuts, which were fun to play with).

Here’s yet another shot of someone in the whiteroom, this time Lauren.

Not quite whiteroom here, but nothing to complain about.

As tends to happen, Lauren fell down in the powder and started laughing.

In the meantime, Derek was wishing for a snorkel.

Here’s Lauren trying to get up while the rest of us re-skin.

After this lap we got a call from the friends who were heading in Saturday morning, and it sounded like they were having some difficulties finding the hut. Hans and I decided to try to go retrieve them while Lauren and Derek took another lap. We spent an hour or so skiing down, yelling, and calling, but our friends turned around from pretty close to the hut. A few hours later we would get word that they were out safe, which was a relief. The bigger relief was that Lauren and I brought quesadilla supplies for lunch and still had plenty of leftovers, which was important because dinner was on its way in Saturday with them. 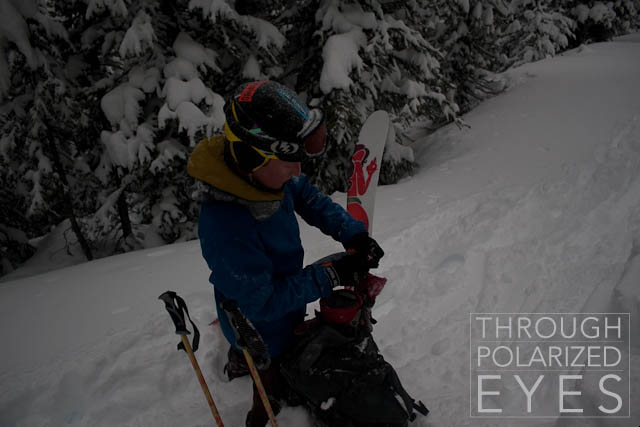 Sometime during the hour-or-so skin back up through feet of deep, light snow, Hans realized he was down a skin. Fortunately he found it just a couple hundred feet behind where he realized it. 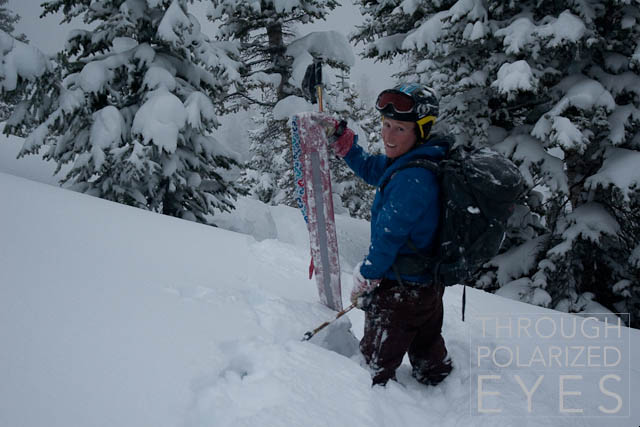 This is why he was able to skin without noticing he was missing a skin. This isn’t the first time this has happened. Hans just has all the luck I guess! 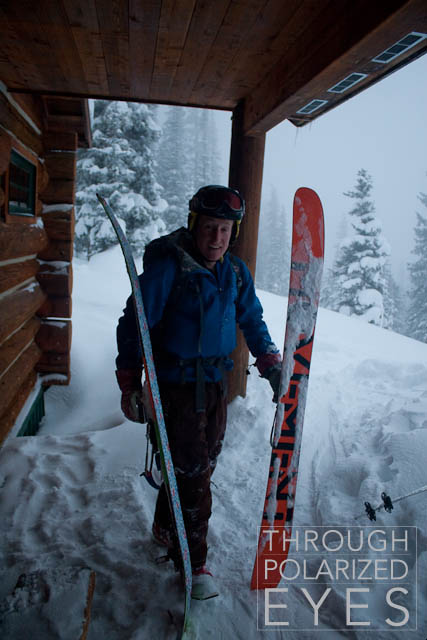 Though we wanted to take another lap, we were worked and called it an evening. The next morning we awoke to substantially heavier, wetter, warmer snow. The trees were caked with rime, and the wind direction was obvious.

On the third lap, disaster struck – one of my skins fell out of my pit vents. Hans and Derek followed my tracks up (and found it sitting right at one of the road cuts) while I struggled up the existing skintrack we had been using. Going up with one skin is miserable. Going up with one ski and one boot is miserable. Booting up is miserable. I fell backwards and sideways down the hill, postholed up to my neck, crawled, rolled, and developed a new skinning technique that can only be referred to as “interesting.” I made it back to the hut exhausted, soaked in sweat, and wondering how people are able to travel through snow with anything other than skis on their feet.

About 1pm we left the hut, heading back out Spraddle Creek. The plan was to go out Red Sandstone and car shuttle over to the cars, but since our friends didn’t make it, there was no car to be shuttled and the plan changed. I rather enjoyed this way out, and expect that I’ll be taking it next time I make it to the Eiseman hut. Creek crossings are a minor risk on the Spraddle Creek trail, and Derek fell in (though stayed dry) twice.

Lauren’s foot was hurting again on the way out, but she toughed it out and made it without any problems.

This way out is far more beautiful than Red Sandstone, and I’m glad we took this route.

A few hours later, we were all back to the car. 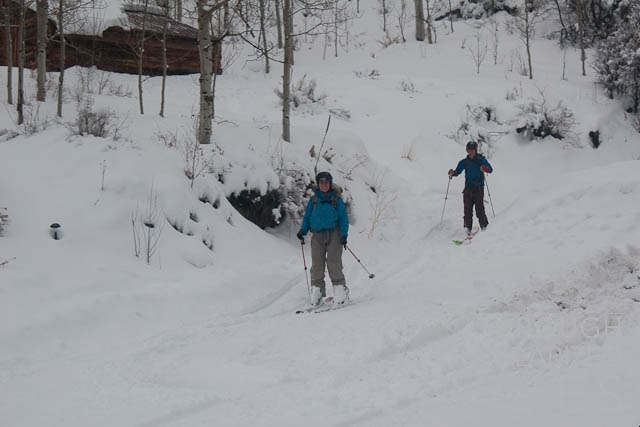 This was definitely one of the best trips to the hills I’ve ever taken, and we all agreed that we needed to take another trip soon.