This past weekend, Friends of Berthoud Pass held the on-snow portion of their grassroots avalanche education program. I volunteered to facilitate groups both days, and I’m exhausted after two ten-hour days up at the pass. Tempted by breakfast burritos at the instructor refresher, Lauren and I signed up to show up at 6am Saturday morning to prepare the beacon-rescue scenarios. When the 4am wakeup call is three weeks away, a free breakfast burrito sounds like a great deal. At 4am, it’s suddenly a much-worse bargain. Nonetheless, we dragged ourselves up there way too early. 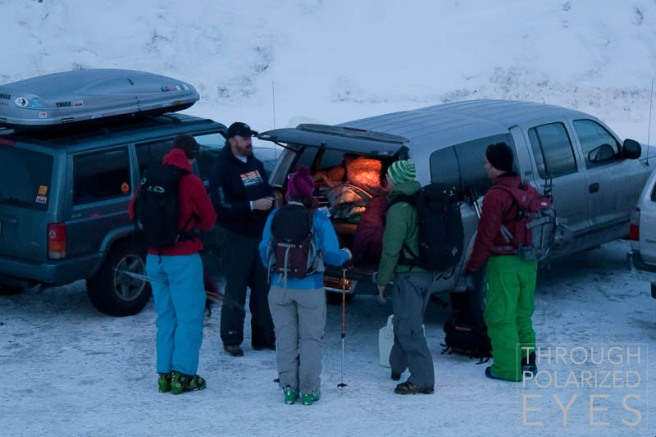 It may have been cold, dark, windy, and early, but the pre-dawn scenery was worth it. 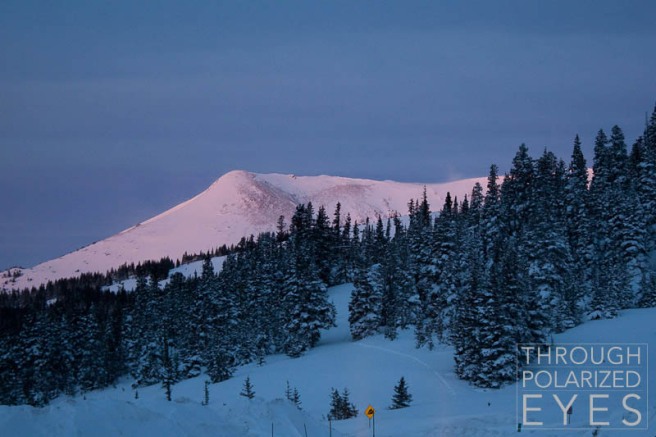 I haven’t been up high early enough for views like this in a while, though it’s going to be more common soon.

It was time to get moving, but I took one more photo before we started skinning. 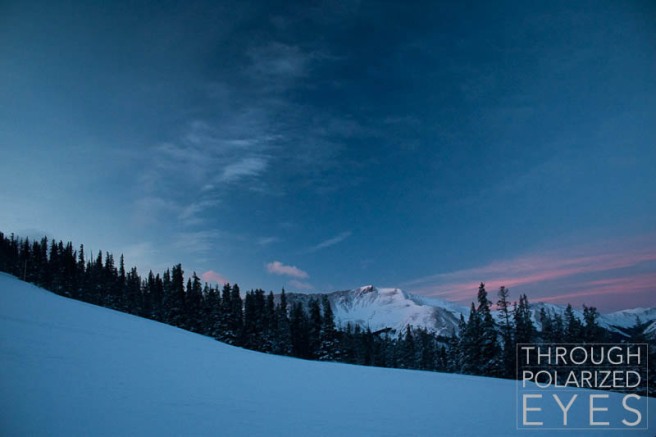 The skin to the first scenario is short – less than five minutes – and then it was time to sidestep down a couple hundred feet of steep trees (to give the appearance of avalanche debris) before digging a big hole.

Sidestepping was way more fun than skiing it would have been – clearly. The snowpack was deep, and we dug in to the depth hoar – over 7 feet deep. This was necessary to demonstrate the time and difficulty that’s involved in digging someone out from a burial.

After burying the beacon, tracking out the scene, and planting clues, we had enough time for another cup of coffee before the students showed up. I was working with Gary this weekend, and our Saturday class was only four people – a result of having lots of facilitators. We got moving up the west side of the pass to look for some reactive snow.

After a 15 or 20 minute skin up during which we talked about terrain and information-gathering, we found a fairly wind-sheltered spot to hang out and talk snow.

We started digging, and at first-glance it looked like we had some interesting layers to work with.

Gary and I demonstrated a few basic pit tests, all the while emphasizing that pits are just one piece of the puzzle, and should be used to look for a reason to not go, rather than looking for green lights. What we found with an extended column test threw up a big red flag for steeper terrain.

The snow failed spectacularly about 18″ from the surface, with a weak, fast, clean break with total propagation and lots of energy. In other words, the block jumped out and I would not ski steep terrain on our chosen aspect.

As previously mentioned, it was a pretty windy day – even for Berthoud Pass. We talked to the group about what the wind would mean for stability in the coming days.

We had a little extra time before we had to be back down for our rescue scenarios, and the wind made a short tour unappealing, so we did a couple quick practice beacon searches. 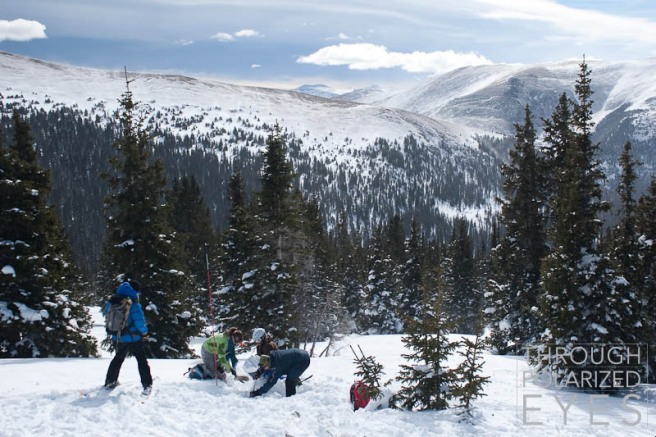 We went down to the hut for lunch before heading up for our group rescue scenarios, and enjoyed a break from the cold and wind. As we were about to drop in to the first scenario, a call came across the radio that there was an avalanche in the High Trail Cliffs area, the same place a snowboarder was killed in an avalanche about a month ago. Gary and I were the closest people capable of responding, so I told Gary to run our group through the scenarios and I’d head over to check it out. A few minutes later I was on-scene, and only saw evidence of a thin, loose avalanche with as many tracks heading out as were going in.

I wanted to get closer to inspect the slide more, but wouldn’t have felt safe under those slide paths even if I had a partner with me, so I took a couple photos, radioed in that it was all clear, and started on the miserable skin back through Hell’s Half-Acre.

I got back in time for the group’s second scenario, a quick debrief of our group, and some time hanging out with other facilitators and discussing the day before heading home.

The next morning was a little easier to wake up for, and things went about the same at the beginning. Gary and I had a larger group Sunday, six plus Cody and Scout. Just as we were getting started on the way up, one of our group members asked what the CAIC report meant by the term “backwards loading,” and I explained that winds had been out of the ordinary lately so there was unusual danger in unusual places. We skinned up to the same place as yesterday, not only to show what the wind did to our old pit (it was nearly filled in by blown snow) but because we knew it was a good wind-break. As soon as we got there, we had a great teaching example of that “backwards loading.”

The ridge of Russel broke quite unusually – the expected failure would be on the left side of that flank, not the right. I’ve never seen that ridge slide, and Gary didn’t think he had either. There was also substantial hangfire. You can take a closer look here; take note of the crack just left of the flank. That crack worked its way up ever higher as we were working in our pits, but didn’t let go while we were there. Amazing to watch from afar, though it would’ve been terrifying to be under.

Lauren’s group came near where we were, because we had much more reactive snow on Saturday than they did, despite just being a few hundred feet away – a great example of spatial variability in the snowpack. Scout was of course happy to see her, and got a little confused about which group she should have been staying with.

We had lots of extra time on Sunday before our rescue scenarios, so we dropped to Pumphouse to practice terrain management. Scout didn’t care about that, and was just happy to be running through the snow.

We still had lots of extra time after that, so we went for a quick lap to the Aquaduct to check out the snowpack on a northerly aspect below treeline (we had previously been on southerly aspects near treeline) and show how different the snowpack can be in various locations, and practice more terrain management. 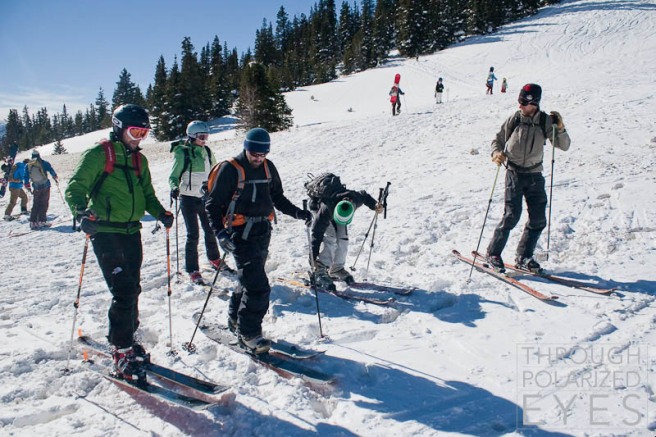 It was finally almost time for our rescue scenario time slot after that lap.

Our Sunday group worked remarkably well. Even though most had just met this day, they worked as a well-oiled machine and we were held up by the group ahead of us in the second scenario despite having to take down flagging and haul in “clues” and the “body” (we were the last group of the weekend).

Though two consecutive long days in the mountains was exhausting, it was a great weekend with a great group of people. It’s clear that everyone in the FOBP family really cares about and believes in what they’re doing, and it’s great to be a part of it. 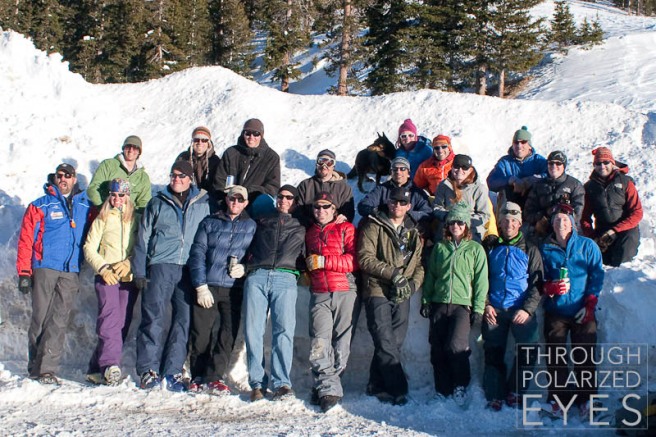