Back at the beginning of August, I booked a trip to the Eiseman Hut for last weekend. It was as good as it gets this same weekend last year, but as I’m sure you know, things are off to a slower start for this season. Nonetheless, last Friday Lauren and I, and friends Andrew and Katy started up from the Spraddle Creek trailhead for a weekend in the hills. If you’re looking for rad skiing photos look elsewhere, as none of the few action shots came out.

It wasn’t long until we hit a pretty nasty bare patch. Since this is primarily a winter approach, there’s no real trail to speak of. The hill is steep, and with boots wet from melting snow, it can be an interesting climb up. Andrew booting: 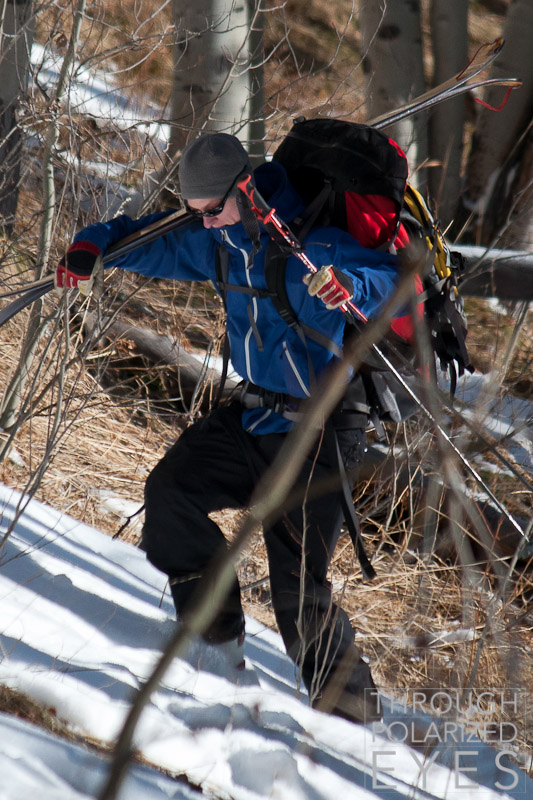 Katy trying to find her way through the maze of downed trees: 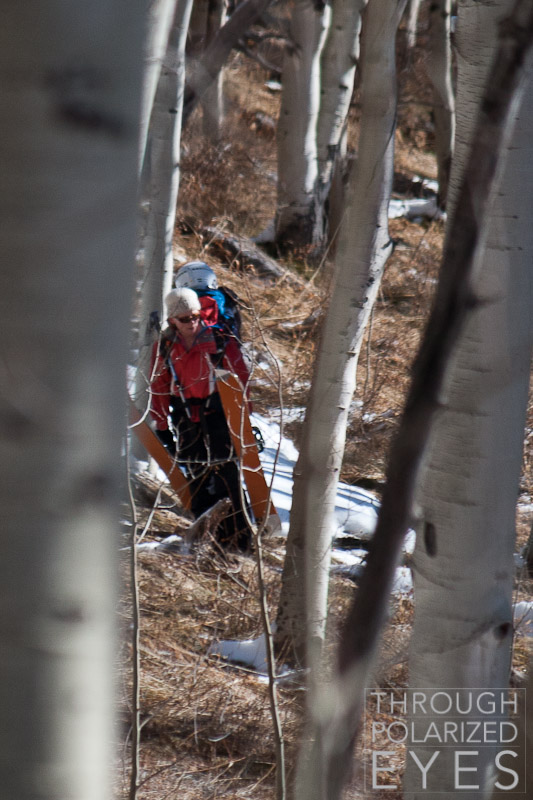 Andrew held it together on a long downhill section, right until the very end. 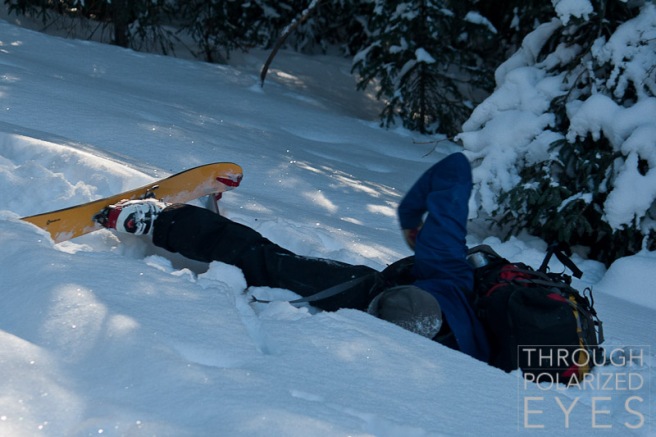 A few hours after starting, we arrived at “the wall,” which was (not unexpectedly) bare.

By late afternoon, Andrew and I were at the hut. We dropped gear, ate some snacks, had some hot cocoa, and went back to meet Katy and Lauren before the sun went down to help them on the final way in, everyone at the hut just as the last bits of red faded from the horizon. Exhausted, we spent that night sitting in front of the fire and not much else.

The next day we went up for a few laps. None of the photos came out, but it wasn’t very good. A thin layer of facets covering up downed trees. At least the DPS Wailer 112s that Andrew, Lauren, and I were all skiing made it almost ski like powder.

Needing a project, Andrew took to clearing the deck of ice – every last square inch he could get to.

The sunset was beautiful, as it was every night.

We made dinner (lasagna), mixed up brownies for dessert, and Andrew and I took a night lap with my new Amoeba light. Amazingly bright, made it as easy as skiing during the day. A huge group of one-nighters trickled in as the night went on – every single group that made it to the hut that weekend (other than us) got lost somewhere on the way in. The next morning we got up and headed out, trying to avoid the bulk of the inexperienced and non-cohesive group that thought it a grand idea to trudge in the seven+ miles to the hut, arrive late at night, and turn right around in the morning. Just like last year, we found some scary snow, despite the “low” rating from the CAIC (last year it was cracking and moving snow, this year it was a thick hardslab sandwiched between layers of facets). This gave us good practice in terrain management, and killed enough time that when we returned to the hut, most of the large group had already left.

Since the skiing wasn’t very good, we spend the early evening sledding on cookie sheets right outside the hut.

Andrew tried to get fancy with it (which didn’t work).

I wasn’t planning on sledding, and was still in my pajamas rather than my shells.

Our last night was much quieter and calmer than the previous night, and we all just sat around the fire quietly relaxing.

Last year, we were able to ski all the way from the hut to the car. That was not the case this year, when we left our skins on for the entire way other than the first mile or so, which made for some interesting times when we would come across steep little hills.

The snow wasn’t great. Really, it was quite bad. But it was still an enjoyable, relaxing weekend in the woods. No politics, facebook, economic news, or anything other than beautiful views, good food, and great company. I can’t wait to do it again.