Black Diamond is always one of my favorite stops at SIA. I had some concerns a couple years ago when they went public and started buying up other companies, starting with Gregory. More recently, they picked up Pieps, another company that fits in with their overall image and one that, with the arrival of their apparel line, could allow them to become a one-stop brand for everything you need to go in to the backcountry. Fortunately, they’ve retained the dedication to high-quality products and their new releases show that.

The Pieps DSP lives on for another year in its curent form factor, and is also refreshed with a new, more rounded case (with the same internals). The Vector was also on display; it’s on the market at long last, and is a rather complex piece of kit so I’ll save further comments until I actually have some time with it.

Most interesting to me was their updated ski construction. They built a new factory from the ground up for the sake of having total control over every step in the production of their skis. BD has gone entirely to ABS sidewall construction, saving weight and improving ski performance over their old cap construction. The fit and finish of the skis I looked at was great, and for once I wouldn’t mind if my entire quiver consisted of BD skis. Of particular note is the Revert (122-95-109, 22m radius, 1650g/ski at 180cm). I loved the shape of last year’s model, but it was just too soft and noodly. This year’s model drops over 100g/ski and adds significant stiffness, as well as toning down the rocker a bit to increase running length and stability at speed. I took it for a few runs at the on-snow demo day, and was blown away. Others I talked to were similarly impressed, and I can see myself on a pair of these sooner rather than later. The Carbon Megawatt (147-120-127, 28m radius) is something to watch for too, at only 1800g/ski in the 188cm version (Carbon Megawatt in blue, Convert in gray, Revert in green). 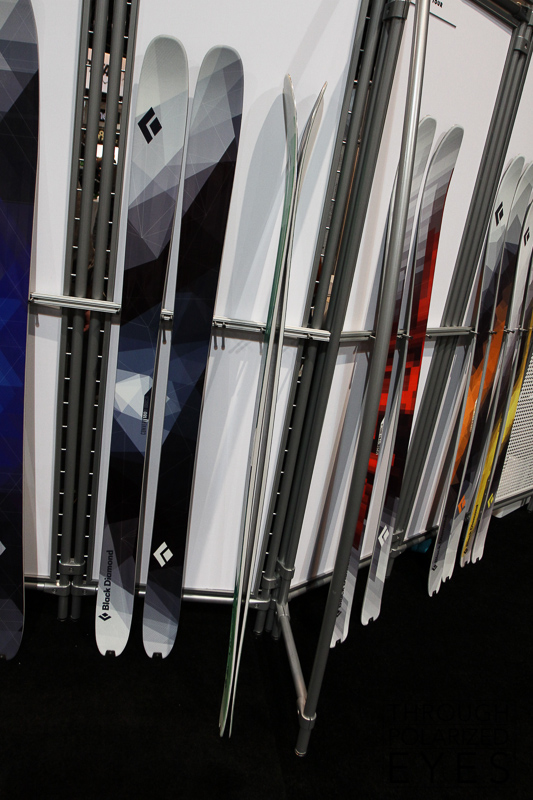 Their new apparel line has been covered pretty thoroughly elsewhere, but was not on display at SIA. They’re rolling out different lines over the next few years, with a target of a full line of softshells, hardshells, insulation, and ski apparel (which will have a more relaxed fit) on shelves by Fall 2015.

While I love the BD Whippet, my one annoyance has been the placement of the wrist strap – out of the top of the handle, rather than the grip. The new model fixes that, and changes the pick to stainless steel. There will be two models, a two-piece with aluminum shafts at 430g, and a three-piece carbon-shafted model that packs down pretty short at 475g. I might have to sell mine and pick up some new ones next year.

The Factor has been completely redesigned and named the Factor Mx 130. The new boot brings a real heel pocket, a well-made liner (rather than the junkers that packed out after just a few days), and bomber toe/heel-piece connections that reduce lateral slop substantially. Among the technical improvements are +/- 2 degree cant adjustment, 30% lower-profile buckles, a beefed up walk mechanism (I blew up a couple in the old Factor), a tech fitting that screws directly in to the chassis of the boot for extra rigidity (this will slow down sole changes a bit, but will still be faster and easier than having to pull the liner on the old boot), and a burly direct connection for the swappable sole blocks (which they appropriately call “Direct Connect”). The fit and walk-mode promise to be quite a bit better than before, but I didn’t get any time in them and so will refrain from commenting in depth on them. 2000g/boot in a 27.5, $769 including alpine and AT soles. I liked (not loved) my old Factors, and these appear to fix most of my complaints. More on the FMx once I put some time in them.

There’re good things coming out of SLC, and I’m already looking forward to the 2014 display.