Going in to this climb, the five of us (Carl, Eric, Marc, Matt, and myself) were aware of a not-too-pleasant weather forecast. Winds were expected to be bad, and we only had a few hour window when it would be less-than-terrible up high. The flip side of this is that NOAA’s wind forecasts often turn out to be entirely wrong, so staying home because of a wind forecast is often a good way to miss a beautiful day in the mountains. This was not such a day.

Friday night, we drove up the road towards South Colony Lake as far as the snow would allow. What does a 4Runner look like with climbing, skiing, and car camping gear for four look like, you may ask? Like a tick about to pop.

I settled in for 5 hours of sleep under a beautiful clear sky, and got up and started skinning up the road shortly after three in the morning.

A couple hours later, we got closer to the lake, out of the trees, and the winds started blasting.

The Needle was socked in when we got to the lake, but we were determined to at least get past Broken Hand Pass and take a look at what we were dealing with, and hope things would clear up. 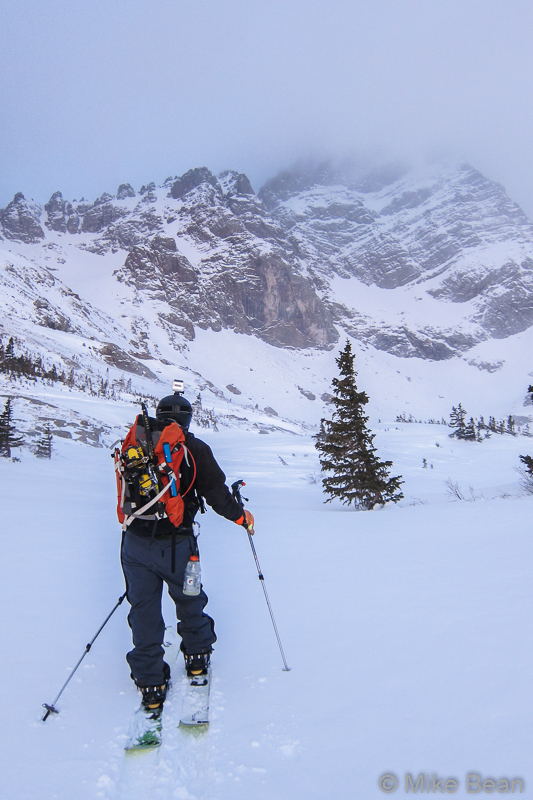 The winds continued at full force as the sun rose, but our forecasted window was coming up quickly so we pushed on.

Winds suddenly calmed as we came in to the sunlight. Things became downright pleasant.

We stopped for a break, had some food and drink, put on sunscreen, and lounged in the sun for a bit. 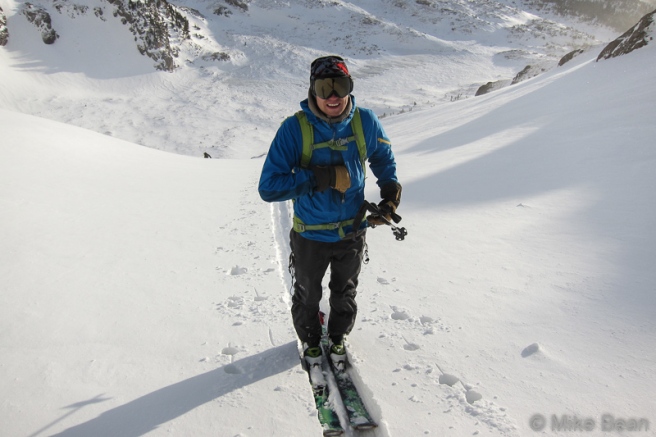 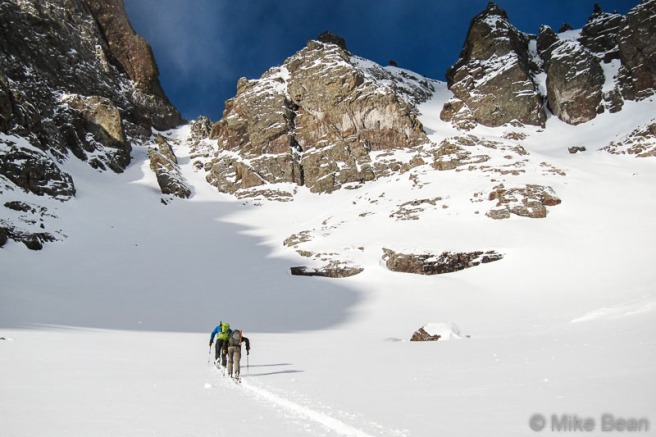 As we climbed higher, we found conditions reminiscent of early-March, not mid-April. Cue the Benny Hill theme song…

As we reached Broken Hand Pass, it was clear that the calm winds we were experiencing were limited to the couloir up to the pass.

The winds through the pass were possibly the worst I’ve ever climbed in, and carried ice shards with it to boot. My face is still peeling from this exfoliation treatment. We traversed towards the Needle, as Carl surveyed what he hoped would be the last peak in his 14er skiing journey.

Despite the horrendous winds, I was still enjoying myself…I think. A few days separation has a way of dulling the painful memories.

When we arrived at the downclimb to get in to the couloir proper, we stopped to survey what was left ahead of us. There were a number of factors that concerned us. First, the downclimb below us appeared rather slick, and there was no good runout in the event of a fall – just cheese-grater rocks. After that, there were two rather large, bare bands of rock. Climbing them wouldn’t be a real issue, but downclimbing them on the way back would be. Then there were winds to deal with – again, not an issue for climbing, but winds appeared to be gusting across the summit with enough force to send someone foolish enough to stand on top with skis on a direct trip to the lake 2,000′ below. They were also blowing up the line, stripping any remaining soft snow and most likely leaving a steep, narrow, thin, and bulletproof strip of snow. Any one of these things could be dealt with – maybe even a couple of them. But combined, none of the five of us cared to push on – remarkable in a group of five ambitious climbers.

As a consolation, we had some pretty good snow for the ski back down to the lake.

The winds were back at full force when we reached the lake. There are three people in this photo, getting blasted by snow.

Four miles later and we were back to the cars, tired, a bit disappointed that we endured the long miles, the crotch-deep wallowing, the big vertical gain, and the icy, blasting winds without a summit. But spirits remained high, because this is what we love to do.