A few years ago I saw reports of people skiing Mt. Bierstadt as a quick after-work outing, and decided that was how I had to do it. My Friday began with an alpine start – but at my desk, rather than in the mountains. A full day of work later and I was dashing up towards Guanella Pass, skinning from the winter closure a mile and a half below the top of the pass.

Pretty quickly I was skinning over postholes left by those who chose to walk. This one is a couple feet deep, and wasn’t the worst – there were plenty of waist-deep wallow-tracks that I chuckled at, felt bad for whoever was suffering through it, and then chuckled again.

My first full view of the mountain left me pretty impressed. These recent spring storms have really plastered this rarely-in-shape slope.

Onward and upward, I glided across the willows that are a hassle even in the summer. 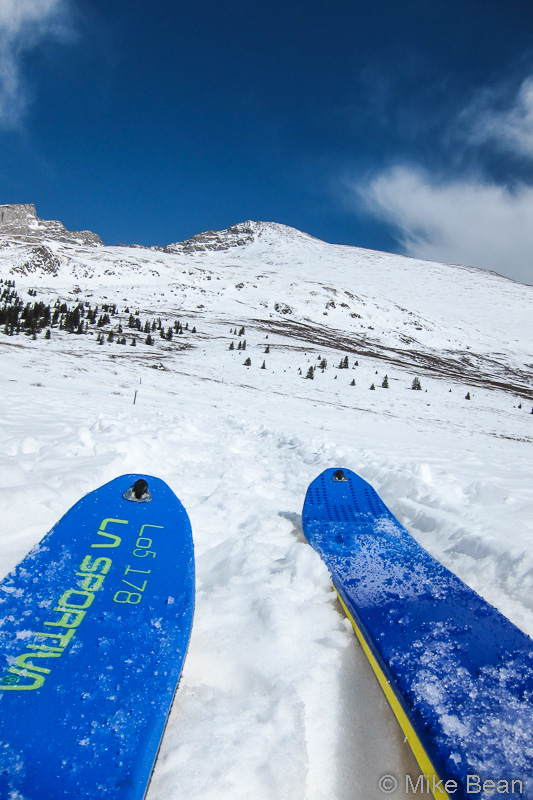 Being solo and climbing after work, I was pushing the pace to beat the sunset. An hour in and this was my view.

Conditions were about as good as they get up there. It was so warm that I skinned in my lightest gloves and a t-shirt, and was still sweating. 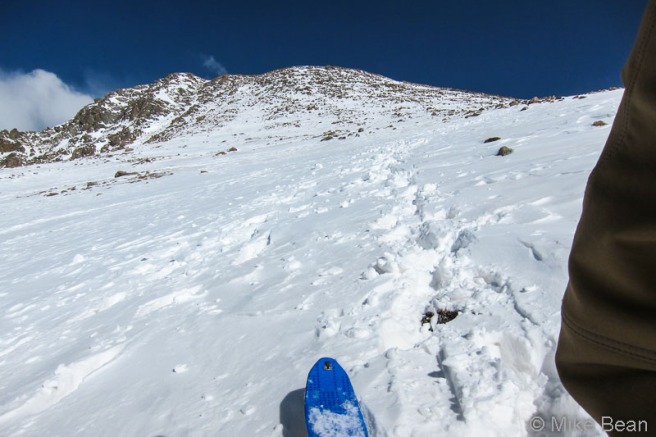 Two hours after leaving the winter trailhead, I was on top. The snow was so good that I was able to skin all the way to the summit.

After having a snack, putting on my jacket, and taking a couple photos, I transitioned over to ski mode (without removing skis) and tried to beat the incoming clouds. 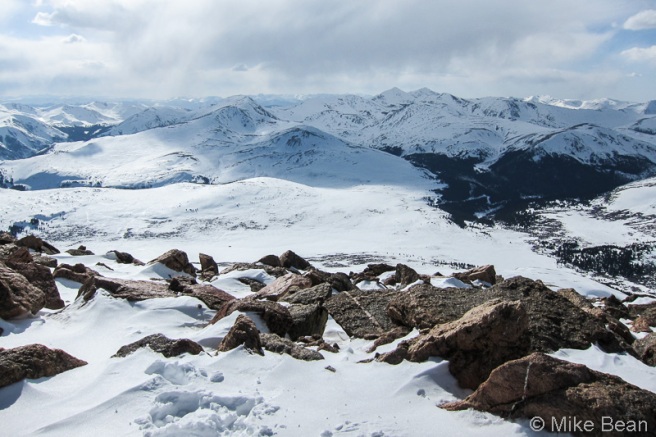 For a “boring” mountain like Bierstadt, the skiing was surprisingly fun. The route got plenty of traffic, with at least two tracks being laid down before me on Friday, then mine, then at least six on Saturday, and at least one more on Sunday. This peak isn’t in very often, and word spread quick that it was.

Eventually, the combination of the sun dropping towards the horizon and incoming clouds combined and the slightly-slushy snow crusted over, making for challenging skiing.

After a long false-flat-uphill skate I was back to the road and then quickly at the car, three hours after starting up. If I’ve ever got an afternoon open and Bierstadt is in shape, I’ll probably be back to do this “almost classic” once again.