A couple months ago, I briefly mentioned FITS Sock Co. after talking to them at SIA. I’ve been using their Ultra Light Ski sock exclusively since then, and have become a big fan. 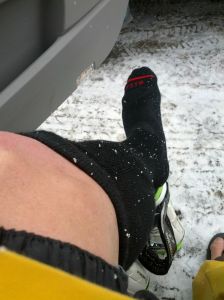 For an “ultra light” sock, these look and feel relatively bulky – I assume because of the twisted pairs of wool they use, rather than weaving with single threads. This apparent bulk immediately disappeared, though, once I put my foot in to my too-narrow boots. There’ve been no signs of durability issues at all.

There are seven (seven!) patents on these socks between certain construction methods and the fit, and they all add up to one great sock. Most impressive to me was the sock staying up through entire days (thanks to the addition of nylon threads throughout the entire sock) in my low-cuff AT boots – my old standby, Smartwool Ultra Lights, would have sagged and bunched up from that. Best yet, the socks are made here right in the USA.

I was given these socks for free, but I wouldn’t hesitate to pay full retail for them.

About five months ago, I picked up a pair of New Balance MR00 minimalist running shoes, to replace the NB MT20v1s that I wore out (uppers were fine – rubber sole was completely worn through and falling apart, after several hundred miles – no complaints here). To date I’ve got approximately 400 miles mixed between asphalt, concrete, and crusher-fine paths on them, and they’re still going mostly-strong. They’re true to size, fit like all my other running shoes in the same size, and they have a very wide toebox.

END_OF_DOCUMENT_TOKEN_TO_BE_REPLACED

For a few years now, my ski mountaineering setup has consisted of Black Diamond Kilowatts, Dynafit Verticals, and BD Ascension skins. Boots have changed a couple times, from heavier and less-precise to lighter and tighter. I got my first look at La Sportiva’s new ski mountaineering line at SIA last winter, and was immediately intrigued as they seemed to hit every point on my list of what was lacking with my current equipment. END_OF_DOCUMENT_TOKEN_TO_BE_REPLACED

Full Disclosure: This jacket was provided to me at no cost by Columbia. I requested a bright blue one but all they had was “Breen,” aka brown.

I’ve finally had a chance to take this jacket out enough times to get a good feel for it, which took a while due to the warm temperatures we experienced through late autumn. I wasn’t so sure about it when I was offered the jacket, for two reasons: first, I already have a couple similar puffies – the First Ascent Igniter hoody, and the Stoic Luft Down sweater; second, I’ve never had a great impression of Columbia products, as they tend to target the low-end of the product range. The Igniter is rather similar to the Shimmer Me Timbers, and has mostly served me well in the past. END_OF_DOCUMENT_TOKEN_TO_BE_REPLACED

Full disclosure: I paid full price for these tires at Salvagetti in downtown Denver, a shop which I strongly recommend.

Last night I finally retired my first Sport Contact, off the rear wheel of my bike (the front, while showing a little wear, is still going strong). It’s billed as a nearly flat-proof tire, and lately I’ve had a couple flats which tells me it was time to replace it. While I didn’t burn through to a different colored rubber, comparing the thickness of the tread to the replacement told me all I needed to know. It was sad to see the tire go, but not unexpected – they’ve got two full summer seasons on them, plus a decent amount of winter miles. Though I didn’t track exactly, it stood up to at least 4,000 miles – most of them while running the bike as a fixed gear. Not bad for a $30 tire. I use the 700×32 size, which is perfect for commuting – it gave a smooth ride but isn’t unreasonably heavy, particularly for a tire with such great flat protection. I absolutely recommend these tires to anyone looking for a mostly-dry road commuting tire.

A couple weeks ago I took part in the Christy Sports demo days at Loveland, as I was looking for a ski to replace the second-year 187 Bluehouse Districts I sold off a couple months ago. These were skis like the K2 Kung Fujas, Rossignol S97 and S3, and the Head Jerry. There were a few other skis I wanted to try as well, like the K2 Obsethed and Head Jimi.

The first ski I took out was the 179 Obsethed, as the Fujas was out on the hill. Conditions were pretty hard, and I wasn’t warmed up yet and just didn’t love them. I knew I’d be happier on them in better conditions and once I had a few laps in my legs, so I took them back with the intention to try them again later.

The 179 Fujas was a great ski – playful but could throw a little weight around when needed. Later in the day I would realize it’s pretty much a perfect blend of the Rossi S3 and S97. Unfortunately K2 changed its sizing this year – a 179 (like with my Public Enemies) used to measure more like a 183 from other manufacturers, but that’s corrected for this year, making the 179 feel just a little small. I lost a good amount of weight over the summer though, and so felt comfortable with a little bit smaller ski. Last up at K2 was the Revival. I was hesitant to ski it as it seemed to be entirely park-specific – no camber, equally rockered tips and tails, and a pretty centered mount. I was absolutely shocked at the ability for it to carve on hardpack, and I think I found the replacement for my Public Enemies when they finally need to be retired.

Next up was the Rossignol tent. I wanted to try the S3 but they were all out on the hill, so I took out the S97. It was exactly the ski I had been looking for – maneuverable, easy to ski, and plows through everything. A bottom-feeding charger if you will. Don’t be fooled by the marketing speak, as this ski has zero rocker at all. That said, I loved it so much I picked up a pair of last year’s, and they’re leaning against a wall waiting to be mounted. The S3 was back when I took the S97 back, so I took it out. It’s an incredibly fun ski, and I wish more terrain had been open. In contrast to the S97’s tendency to go through anything in its way, the S3 likes to go over everything. I have a pair on order from a local shop, and can’t wait to get them out on a powder day. My only dilemma is what bindings to put on them.

Next up was Head. I tried the Jerry, and hated them. There was a weird hooky feeling to them, and I just couldn’t get them to feel right. I jumped on the Jimi next, and loved it. Powerful, slarvy (even on mostly-hardpack, though it had been snowing all day and softened things up), and easy to lay on edge for big-radius turns. Lauren is getting a pair of these, and I think she’ll like them.

I stopped back at the K2 tent to try the Obsethed again, and all they had was the 189. I took it out and it was fun, but too big for me. I liked it quite a bit more, and can understand some of the hype around it. I was getting tired and badly needed to stop for lunch and a rest break at this point, as I had been demoing skis non-stop for six hours. I wish I’d been able to try some of the smaller brands (Ski Logik and Icelantic specifically) but just ran out of time.