There are days when everything goes right; this was not one such day. Tuesday was remarkable in that almost everything unpleasant about Colorado ski mountaineering wrapped itself up in a single day. I set my alarm before going to bed for 2:45am; my eyes opened at 1:55am and I was pleased to see that I had another hour to sleep. Next thing I know, it’s 3:50am. Fortunatley I’d completely packed up the night before, and was able to be on the road in record time with wheels rolling at 4am sharp. I made good time and met Matt at the trailhead just prior to 7am, only half an hour late.

We’d hoped for some portion of the road to be melted out enough to drive, but no such luck. We began what had been planned as an overnight trip to attempt two peaks way down at 8,800′. 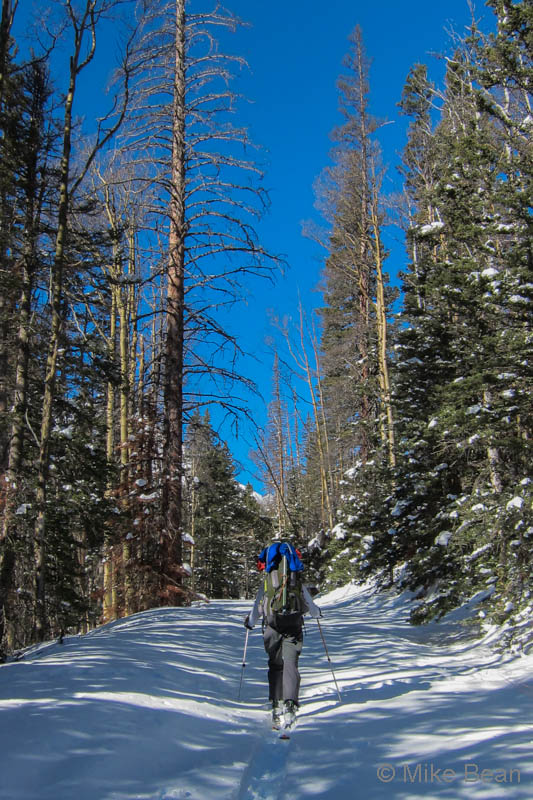 Five miles and a couple hours later we were just shy of 11,000′ and dropped all our overnight gear to make the going easier up Humboldt. This is where the real fun began. Bushwhacking up through 400′ or so of trees took on the order of an hour and a half – because of course it was not just adventurous skinning through tight trees, we were both suffering from glopping pretty bad at this point. Eventually though, we made it to treeline and what we’d hoped would be easier going. 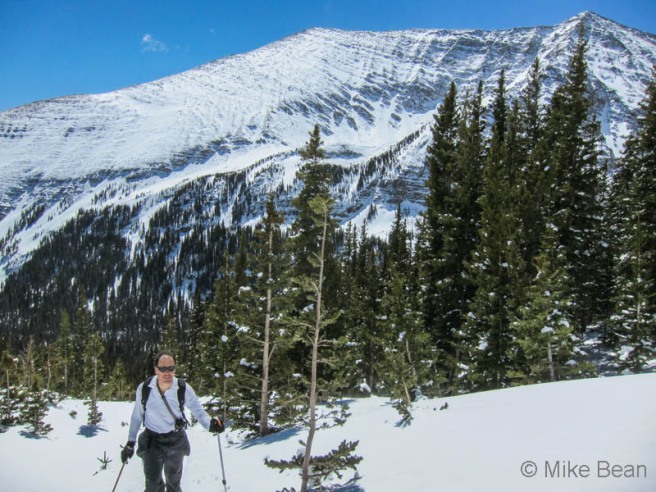 There was no such luck though, as while the glopping did continue to plague us, we got to add breakable crust and blazing heat with dead-calm air to the mix. On the upside, as long as you kept moving the glopping would tend to stay away. Stopping for even a couple seconds was enough to freeze quite a bit of snow to our skins.

After a few big switchbacks across the face, I decided it was worth a shot to head to the ridge and see if the snow would be easier going there. We worked our way across to a more direct-looking line, and suffered with some more miserable unsupportive, rocky, gloppy skinning. “This is terrible, booting’s got to be easier up this spot” I thought. Nope! Big blocky talus with variable snowcover somehow managed to be even worse. Skis went back on, and eventually we gained the ridge. 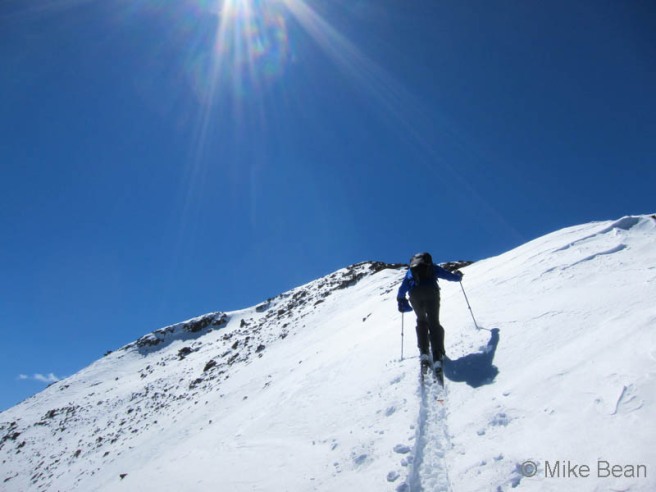 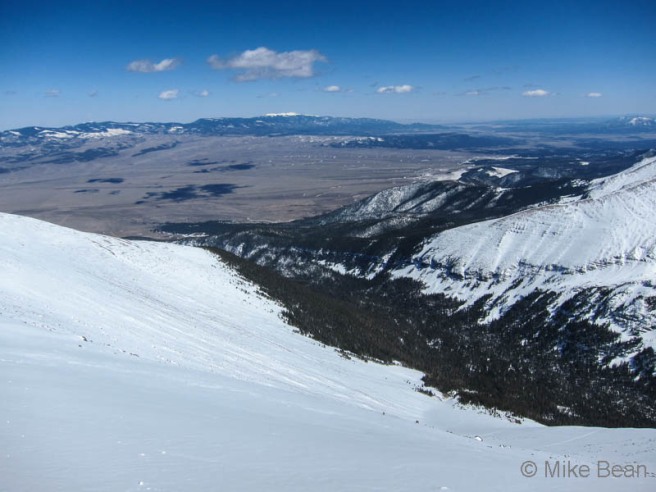 As we gained the ridge, a nice breeze helped us cool off and we finally got to the summit a half hour or so later. 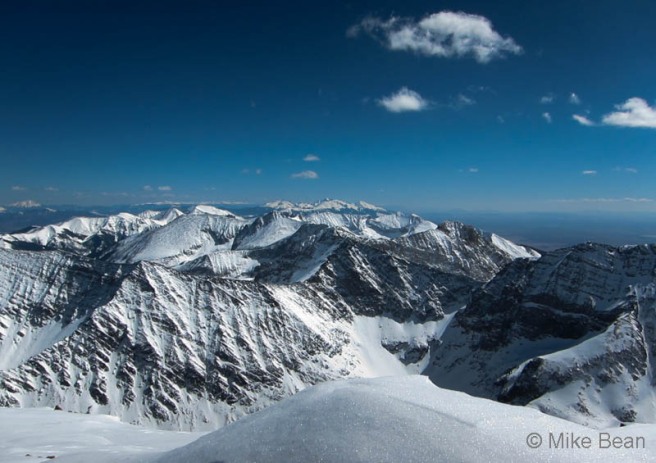 The Sangres had as much snow as I’ve ever seen on them. Matt and I discussed snow conditions and came to the consensus that getting up to Broken Hand Pass would be dangerous if not impossible thanks to a foot or two of cold, unconsolidated snow, and that the south-facing terrain past the pass would very likely be at least as miserable as what we’d fought all the way up Humboldt. One of my feet was also hurting a fair amount, which made the decision to head home after Humboldt easier. 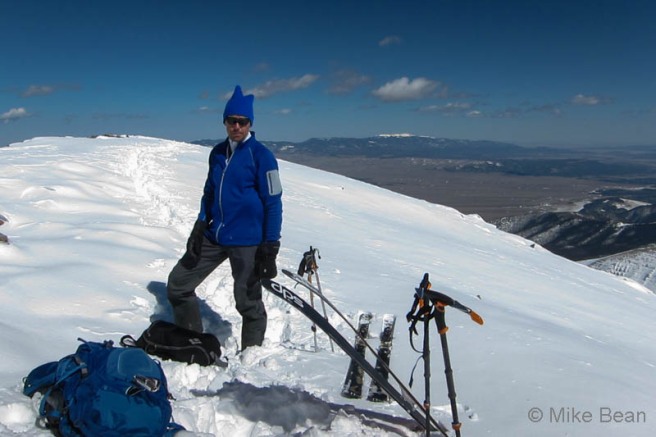 Don’t let the smile fool you – this day was an all-time slog. Realizing that this sort of thing happens quite often (though not usually to this extent), Matt likened 14er skiing to a gambling addiction; the one pleasant rewarding day keeps you coming back even though it tends to be exhausting and, in at least some way, quite unpleasant.

We didn’t spend too much time on the summit – a couple photos and a snack, ripped skins, and got on our way. As I said before, there’s about as much snow in the Sangres as there ever is – which meant that we were only hitting 3-4 rocks on each turn towards the top. Because of the slow climb up (largely thanks to the heat, unsupportive snow, and glopping) the sun moved away far enough west that what had been mostly soft turned in to breakable crust. “Miserable and exhausting” is putting it lightly.

Eventually we made it back to treeline, and got heading in to the trees. I’d been dreading it all day, but it turned out to not be so bad, comparatively anyway. It didn’t take too long to get back to our overnight gear, which we quickly stuffed in to and lashed on to our packs. The road wasn’t so bad, mostly a quick ski out with only occasional super-grabby sections of snow.

About six pm we hit the end of the snow and the half mile of dirt road walking in ski boots went quickly. Finally, the long unpleasant slog was over. Quite hungry and tired from the day, we decided to hit up a bar/pizza place in Westcliffe for dinner before making our drives home. “Sorry, kitchen’s closed on Monday and Tuesday.”